Every week I get tons of videos, pix and stories from around the globe. Most of them are funny, some are inspirational and some are downright disturbing. Here's is what I'd like to share. Enjoy. 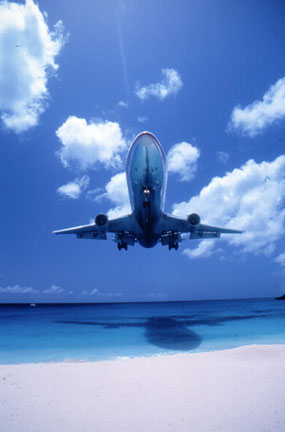 I took this shot of an AA plane flying into St.Maarten in 1990

Got an hour more today as Daylight Savings turns back to normal (Thanks to Ben Franklin’s folly) and while my friend Joe Bonamassa is filling my speakers with songs from his 4 DVD Set Tour de Force he did earlier this year in London, I want to share a couple of funny picture galleries, videos and stories I find in my email inbox daily.

By the way I hope this is not what happened to you this morning when the  Alarm Clock was mistaken.

The first one is a story I can relate to as a string musician. It describes Itzhak Perlman, the world renown Israeli born violinist, conductor and music pedagogue who reportedly had to doubly overcome his polio handicap during a concert at the Avery Fisher Hall at the Lincoln Center in New York in November of 1995. Even though this story was published by the Houston Chronicle in 2001, it turned out to be a hoax as can be found on Snopes. But beyond that as a string musician I can attest the challenge of playing leads on less than the usual number of strings on an instrument. When I push a B or G string too far in a blues bend and it breaks, the rest of the song becomes a matter of transposing and rephrasing instantly. A true challenge of the mind. But moreover the message of this story is so heart warming that I decided to share it with you:

On November 18, 1995, Itzhak Perlman, world renowned violinist, came on stage to give a concert at Avery Fisher Hall at Lincoln Center in New York City.

He walks awkwardly, yet majestically, until he reaches his chair.  He sits down, slowly puts his crutches on the floor, undoes the clasps on his leg braces, tucks one foot back and extends the other foot forward.  Then he bends down, picks up the violin, puts it under his chin, nods to the conductor and begins to play.
His audience is used to this ritual.  They sit quietly while he makes his way across the state to his chair.  They remain reverently silent while he undoes the clasps on his legs.  And they patiently wait until he is ready to play.

This particular time, just as Itzhak Perlman finished the first few bars, one of the strings on his violin broke.  You could hear it snap – it went of like gunfire across the room.  There was no mistaking what that sound meant.  There was no mistaking what he had to do. (What follows is actually the weak part of the story). The audience figured Itzhak Perlman would have to get up, put on the clasps, pick up the crutches and limp his way offstage to either find another violin or find another string for this one, and they would have waited patiently for him to do so.

Instead, he paused a moment, closed his eyes, and then signaled the conductor to begin again.
Of course, everyone in the audience knew that it is virtually impossible to play a symphonic work with just three strings.  But that night Itzhak Perlman refused to know that.

The orchestra began and Itzhak Perlman played from where he had left off.  He played with a passion, a power, and a purity they had never heard before.
You could see him modulating, changing, and re-composing the piece in his head.  At one point, it sounded like he was de-tuning the strings to elicit sounds they had never made before.  When he finished, there was absolute silence in the room.  Then the audience  rose as one and cheered.  It was truly an extraordinary outburst of applause from every corner of Avery Fisher Hall.  The entire audience was on its feet cheering and whistling and doing everything they could to show how much they appreciated what Itzhak Perlman  had achieved that night.

He smiled, wiped the sweat from his brow, raised his bow to quiet the audience and said in a quietly distinct tone:  “You know, sometimes it is the artist’s task to find out how much music you can still make with what you have left.”
Here is a man who has prepared all his life to make music on a violin of four strings, who, in the middle of a concert, finds himself with only three strings; so he made music with those three strings and the music he made that night with just three strings was more beautiful, more memorable, than any he had ever made before.

Why did the police stop him?

My friend Eric retired to the Panamanian Highlands in 2005. Before his retirement he was Holland’s top law enforcement officer, which is probably why he noticed instantly the reason why this motorist with his beautiful by-rider in Paris was stopped by the gendarmes, as he send me the following picture show yesterday.

That’s right. The police stopped them because she took the helmet off!!!

I have something in my garden you don’t