Since Sunday is intended to relax us from our weekly worries and work tensions, here are some fun stories to relax and have fun with. 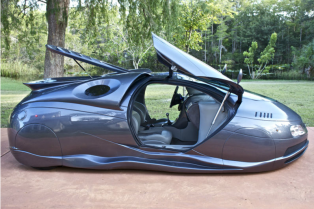 My attention this week on several occasions was caught by vehicles that are much more than just a means of transportation.

I think it started out when I saw the ETV on eBay, built by a guy in Sebastian Florida. The Extra Terrestrial Vehicle at first sight looked a bit impractical, but after some research it turned out that everything functioned in line with DOT requirements. Asking price was $100,000 and it sold to a private bidder. When I learned that “Mike”, the guy who built this beauty, has already built some 60 cars in the past 20 years, I thought how much fun that is and lucrative to boot. Here is a math assumption. 60 cars at an average sales price of $25,000 is $1.5 million or $75,000 per year. No doubt he has a well researched and profitable way of getting his materials, so he clears a nice income this way. And then I remembered a Picture powerpoint a good friend of mine sent me depicting mobiles from long forgotten times, built by individuals with the same passion as Mike, as they move the world forward with their creativity and perseverance. Here is a look back at Vehicle Ideas from the early 20th century

During the Blues Festival we had a car display from FIAT in Jacksonville, exposing those wonderfully popular FIAT 500s to a growing group of admirers. When I saw it first the first time on American roads I had to laugh out loud. The FIAT 500 reminds me of the many vacations we took in Italy in the late 50s and early 60s and every time the door of a 500 opened there were 6 or 7 people falling out of the car. The FIAT 500 I remember was an Italian family car to run around town or go to the beach with. When I read American reviews that dislike the power train of 101 horse power, or the knee space in the back seats, or being sensitive to crosswinds on the highways when 18 wheelers pass them, I can only shake my head in disbelief. 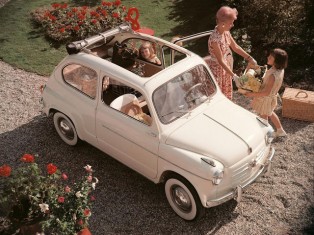 No nostalgia can change the fact that The FIAT 500 was meant for the 1950s in Southern Europe, for start-up families of 2 parents and 2 kids pretty much like this picture here. I remember in 1965, after a month long vacation in Torre del Lago Puccini my oldest brother and I pledged to go back the next year and hang out with our summer girl friends. We would buy a FIAT 500, the cheapest car we could afford and come back down. The price of a standard FIAT was Hfl 1,500, about $800. Of course we never made it, but I still remember my two girlfriends names: Donatella Gatteschi and Elizabetta Harangoni from the city of Lucca. That is 49 years ago. That next year I played in a band and played gigs around Europe. Never got to buy or drive one. Who knows….! 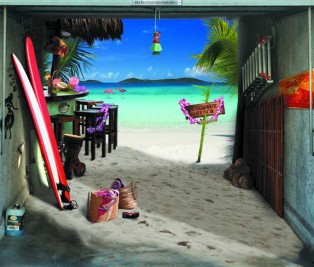 And of course from vehicles it is a short jump to garages. A German company called “Style your Garage” has put an end to ugly and boring garage doors. They make very realistic printed-on 3D motifs that will make your neighbours and people passing by stare of amazement. They have a variety of prints, ranging from family oriented to not so family oriented. Check out their website for many fun prints. How about an Angry Pumpkin for Halloween? Fort Knox Gold Reserves a wine cellar or a parked Jet. It’s a novelty that fits perfectly in our time of personal expression. Smart. Here are some more ideas.Garagedeuren

An engineer dies and reports to the Pearly Gates.

Saint Peter checks his dossier and, not seeing the man’s name there, accidentally sends him to Hell.
It doesn’t take long before the engineer becomes rather dissatisfied with the level of comfort in Hell.
He soon begins to design and build improvements. Shortly thereafter, Hell has air conditioning, flush toilets and escalators. Needless to say, the engineer is a pretty popular guy.

One day, God calls Satan and says: “So, how are things in Hell?”

Satan replies: “Hey, things are going great. We’ve got air conditioning, flush toilets, and escalators. And there’s no telling what this engineer is going to come up with next.”

“What!” God exclaims: “You’ve got an engineer? That’s a mistake – he should never have been sent to Hell. Send him to me.”

“Not a chance,” Satan replies: “I like having an engineer on the staff, and I’m keeping him!”

God insists: “Send him back or I’ll sue.”

Satan laughs uproariously and answers: “Yeah, right. And where are you going to get a lawyer?

A couple of old guys were golfing when one mentioned that he was going to go to Dr. Steinberg for a new set of dentures in the morning.His elderly buddy remarked that he, too, had gone to the very same dentist two years before.

“Is that so?” asked the first guy. “Did he do a good job?”
The second oldster replied, “Well, I was on the golf course yesterday when a guy on the next fairway hooked a shot. The ball must have been going at least 180 mph when it slammed me right in the groin.”
The first old guy was confused and asked, “What the hell does that have to do with your dentures?”
“It was the first time in two years my teeth didn’t hurt.”

And with the following video I’m going to finish up for this Sunday and play some guitar for the afternoon. As a teenager growing up in Holland I played and sang in several bands. I often misheard song lyrics. Technology wasn’t like today with the Internet where you can look up song lyrics. We had to sit with the record player needle on the vinyl record (yes this was even before reel-to reel or cassette tape and 8track was still a future dream) and listen to a line, write it down and find the groove again for the next line, inevitable scratching the vinyl. One of the first songs I figured out that way was the Rolling Stones version of “It’s all over now”. The official opening line is “Well baby used to stay out all night long”. My opening line was “My baby used to stake out all night long”. It took a couple of years before I realized that it didn’t make sense.
Here is a part of brilliant British comedian Peter Kay’s’ Tour That Didn’t Tour‘ about misheard lyrics. Hilarious.