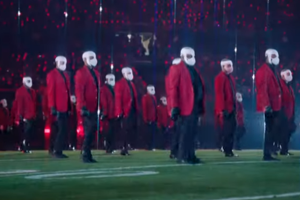 At the risk of showing my age, I was very disappointed in the Super Bowl's halftime show.

At the risk of showing my age, I was very disappointed in the Super Bowl’s halftime show. I was originally surprised to hear The Weeknd was going to be the headlining entertainment, mostly because I could only name one of his songs, but I was looking forward to a great show! After all, someone talented enough to follow the likes of Michael Jackson, the Rolling Stones and Beyonce has to be awesome, right? Wrong, halftime sponsor Pepsi should be ashamed!

In casual conversation pre-Super Bowl, most of the people I asked had never heard of The Weeknd. In all fairness, when I asked people younger than Tom Brady, they knew exactly who I was talking about. My big expectations were met with bad choreography of dancers wearing tighty-whiteys on their heads. My husband fondly referred to the masked dancers as the “Covidites”. I’m certain I saw some of the cardboard cutouts get up and walk out of the show.

Apparently, the symbolism of the masks is a social statement about Hollywood and “self validation” plastic surgery.

The Canadian singer songwriter, Abel Makkonen Tesfaye, is the Weeknd and he became famous writing and performing songs about sex and drugs. I know, my parents said the same thing about the music I listened to when I was younger. Yep, I’m showing my age.