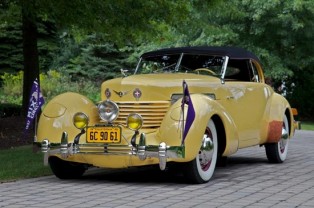 Tom Mix’s Supercharged Cord is to be featured at the 17th Annual Amelia Island Concours d’Elegance. Just 196 Supercharged Cord 812 roadsters were built by the Auburn Automobile Company. They are rare, radical, futuristic and stunningly beautiful. In over 75 years that beauty has not faded. Known as “the coffin-nose Cord” the rarest of them all is the Tom Mix Cord, a 1937 supercharged 812 convertible. It’s the car in which cowboy star Tom Mix was killed.

Mix was one of America’s first cowboy movie stars; the original Hollywood good guy in the white hat. The Pennsylvania-born cowboy star practically created the western movie genre single handed, and was a pall bearer at Wyatt Earp’s funeral. The cowboys Mix portrayed codified masculine behavior on the American frontier. He was the idol of millions of American boys.

On October 12, 1940 Mix who, ironically, did most of his own movie stunts, crashed his supercharged Cord in a construction zone on Arizona Route 79. The Cord was capable of over 100 mph and Mix had been travelling nearly 80 mph and missed the signs saying “BRIDGE UNDER REPAIR”.

He had just stopped at the Oracle Junction Inn, a popular gambling spot, and placed a call to his manager. No one knows what they talked about. Less than an hour later the star of 348 movies was dead, killed, hit in the head, by an aluminum suit case, filled with money and securities, that he had placed on the back seat of the Cord.

Now owned by Bob White of Scottsdale, AZ, Mix’s Cord is one of only three with a rare set of options, including an external-mounted spare. The other two belonged to jazz singer Al Jolson and actress Barbara Stanwyk.

White is a long time Cord enthusiast who bought Mix’s car at auction in 2010. He then began a thorough and painstaking 18-month “frame-off” restoration, the car’s first since 1940. The restoration revealed damage from the fatal accident. The Tom Mix Cord now appears, “…exactly as it did 15 minutes before the crash,” said White. “Our biggest challenge has been determining what it looked like in 1940 and then reproducing those parts because everything had to be handmade.”

White’s restoration has been physically and historically meticulous, requiring hours of careful research. Exact reproductions of Mix’s dashboard-mounted holster and the oversized accelerator pedal to accommodate Mix’s cowboy boots have been created. Replicated hand cast medallions, presented to Mix by the King of Denmark, are placed as they were in 1940 on the Cord’s distinctive coffin-nose hood.

“The 812 Cord is rare, technologically advanced and extraordinarily desirable,” said concours founder and Chairman Bill Warner. “The Tom Mix Cord is the most famous of the breed. It’s a true ‘destination car’, the kind that hard core classic car enthusiasts will travel hundreds of miles to see.”