Feature, In the News, Weather

My daughter and her six year old son were at home in Henryville, Indiana when the devastating tornadoes nearly flattened their small town. 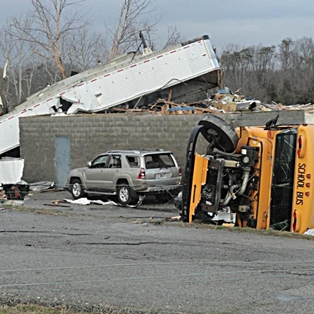 My daughter and her six year old son were at home in Henryville, Indiana when the devastating tornados nearly flattened their small town.

Less than a week later we are hearing incredible stories of survival, including a mother who lost part of both of her legs while saving her children. And stories of tragedy where a 14 month old girl, found in a field nearly ten miles from her home, lost her battle for life, joining her parents and two siblings that were killed in the storms.

When I first heard the tornados hit Southern Indiana, communications and power had been knocked out, making it a difficult Friday afternoon trying to learn how many of our loved ones came through the storms. Friends and relatives who live in neighboring towns told me text messaging was about the only way to get information. I frantically searched twitter feeds and Facebook looking for reliable information about Henryville. An old friend from high school called me and said, “Judie, Honey, I can’t lie… Henryville was hit bad and it doesn’t look good.” My heart sank! My dear friend even offered to drive to Henryville and find my daughter and grandson for me!

I dropped to my knees and prayed. Trying to stay calm and composed for my teenaged daughter still living at home, I gave her the task of watching for new information on Facebook and watching my phone for any news from the Indiana or Kentucky area codes. This was the Friday of Fernandina Beach’s return of Sounds on Centre. Friends were arriving for us to head downtown, so I grabbed a quick shower with my original intention of slipping into a pirate costume and grabbing my SearchAmelia video camera and heading to the historic district. I wasn’t going anywhere until I heard more about my family. When I stepped out of the shower, I couldn’t even wrap my head around finding a costume. I barely found shorts and a tshirt to put on. My daughter joined me upstairs as a friend shouted, “The Weather Channel is showing Henryville!”

We quickly turned on the television in my bedroom and just stared at the screen. Main stream media had helicopters flying over Henryville and neighboring Marysville showing the devastation. It looked like a war zone! The school had been demolished! Semi trucks and a school bus were lying on their sides. Homes and buildings were flattened. Telephone poles and trees were blown barren, broken and twisted in the rubble. Cars had been tossed onto buildings.

As we later learned the Courier Journal of Louisville, Kentucky reported, “Tornado that tore through Henryville had wind speed of 175 mph.” The article went on to say, “The largest of the two tornadoes that crossed southern Indiana was an EF4, with a wind speed of about 175 mph, the weather service said. Only two percent of all tornadoes are that intense. It caused most of the damage in Henryville.”

My grandson, Jason, had just started a new school in Henryville because the family had moved from Charlestown, Indiana just a few weeks before Friday’s devastation. Living in Florida, I felt completely worthless. At this point in time, I couldn’t reach my daughter. I didn’t know if she was at work or in class that day. I don’t even know where Jason goes for after-school care. All we could do was wait.

Finally, I received a text message from my daughter. It read, “It literally jumped over us… our house is (insert major cussword here) and my car is done, but we are ok. We have no town. I think Jason pee’d his pants. LOL”

We started letting family know we had heard from them, but other family members were still unaccounted for. With communication channels barely working, I didn’t hear from her again until later that evening when she drove to her Dad’s house, a few towns away, and finally had cell service again.

Henryville High School, which shares its campus with the elementary and junior high school, is out until March 9th at least. Officials are supposed to meet on Thursday to determine where, if, and how students will finish out the school year.

The massive tornado outbreak was well predicted by forecasters. As I turned on FOX News after lunch I saw the tornado watches and heard comments that Louisville, Kentucky was in the bulls-eye. Both sets of my grandparents are from that area, fondly referred to as Kentuckiana. Louisville is the closest big city of reference, so I knew these storms were heading to my old stomping grounds. Emergency meetings were held and many school districts chose to dismiss school early. In an article in the online version of the Wall Street Journal written by Jack Nicas, Mike Esterl and Douglas Belkin, they reported Joe Sullivan of the National Weather Service said, “I can’t emphasize how fortunate it was that the school had let everyone out beforehand, there would have been many, many fatalities in that school.”

When you look at the images in the gallery, notice the size of the hail. Reported as baseball and softball sized, it is still remarkably large when my daughter, Amanda Watts, captured these images.

To add insult to injury, Mother Nature dumped about four inches of snow on the devastation and homeless in both Henryville and Marysville on Monday.

I have since learned the rest of my extended family has been accounted for and folks are coming out of the woodwork from surrounding communities to help those in need. Essential supplies and hot meals are being handed out by the local VFW and crews of volunteers are working tirelessly to help clean up the devastation.

If you would like to help, here are a few organizations that are helping these folks put their lives back together:

–Clark County Emergency Operations Center said, “Greatest needs are for money, non-perishable food items, diapers, wipes, shampoo, soaps, cleaning supplies, buckets, brooms, plastic storage totes and plastic garbage bags.”
–Goodwill of Southern Indiana is taking gently used donations. Please state the donation is for tornado relief. Call (812) 283-7908 for more information or to organize a donation drive.
–Kentucky Cattlemen’s Foundation is accepting monetary donations to rebuild fences and facilities. Learn more at www.kycattle.org.
–U.S. Equine Disaster Relief Fund is collecting donations to provide feed and supples for horses affected by the tornadoes.
–Community Foundation of Southern Indiana is accepting donations online and through the mail. Visit www.cfsouthernindiana.com for more information.
–The American Red Cross is partnering with the Seventh Day Adventist Community Services collecting donations in Charlestown, Indiana. Call (812) 287-0090 for more information. They do not have voicemail at this time.
–United Way Volunteer Service in Jeffersonville, Indiana can be reached online or you can call (812) 287-0519.
–The J.B. Ogle Animal Shelter is taking dog and cat food donations. The donations should be delivered to the shelter located at 201 Willinger Lane in Jeffersonville or to PetSmart on Veterans Parkway.
-The Shamrock Pet Foundation is taking donations for animals in the affected areas. Those interested in making donations can call 502-585-3220 and arrange drop off.

While my daughter and her small family were uninjured and they will recover, as of the time I am writing this they are still pretty shaken up. The First Baptist Church brought them groceries this afternoon and power has been restored to their home and she’ll find out tomorrow if the insurance company will total her car rather than fix it. Tarps are covering the roof that was pulled away from the frame of their home. It is missing plenty of shingles and needs to be re-attached to the house. She called me on her cell phone today, but half of our conversation was, “Can you hear me now?” One of the biggest unknowns is what will happen with the school aged children who witnessed this devastation. They have been traumatized. My grandson is building “Henryville” with his blocks and other toys. Then he demolishes the town and his toy helicopter flies overhead and reports on the damage. I advised my daughter to keep him away from the television reports if she could.

Thank you all for the good wishes and prayers that have gone out to those in the paths of the storms.