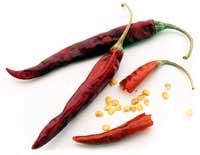 Did you know that the potent, hot fruit of cayenne has been used as medicine for centuries? In addition, it has been used for the following problems:

Diseases of the circulatory system: It is still traditionally used in herbal medicine as a circulatory tonic.

Rheumatic and arthritic pains: Rubbed on the skin it causes a counterirritant effect. A counterirritant is something which causes irritation to the area to which it is applied. This makes it distract the nerves from the original irritation (such as joint pain in the case of arthritis).

Sore throat: If gargled with water it can work as an effective treatment for sore throats.
Styptic: Application of cayenne powder has traditionally been considered to have a powerful coagulating ability.

Thermogenic: Cayenne pepper is used both internally and externally in colder climates to protect against frostbite, it may be used in a crushed or powdered form in socks or taken internally in a tea to increase body temperature and circulation to the¬†extremities.

Having said this, here’s a sweet hot wing recipe we think you’ll enjoy. ¬†Note: the longer you let the wings soak in the marinade the better the flavor, but if you are in a hurry just a couple of hours marinating will do the trick. 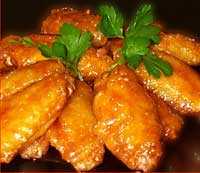