Only the threat to buy euros in unlimited quantities was enough for an eight percent currency correction against the Euro. 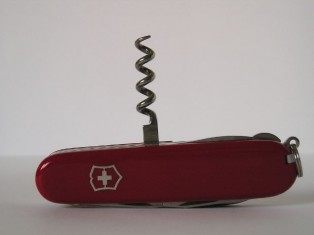 The Swiss Corckscrew is ready for a currency war

When there’s turmoil in the stock market and/or in the geopolitical environment, investors sometimes flee toward perceived “safe havens”  or currency alternatives in the hope of protecting a portion of their assets. In particular, the Swiss franc is very popular these days. While there’s no guarantee that any investment will be free from risk, the following assets have at times been on the receiving end when circumstances get tough:

For example, Europe’s debt woes have soured investors on the euro (the European common currency) and pushed investors to the Swiss franc. This flight to the franc has been so strong that in early August, the franc hit a record high against the euro, according to The Wall Street Journal.

Unfortunately for the Swiss, the high value of the franc created countrywide economic problems. The Wall Street Journal said the soaring franc, “pushed some weaker Swiss exporters into bankruptcy, and sent others scrambling to slash prices to hold onto business.” In addition, “Tourists, an important source of income for the Swiss economy, now find it more expensive than ever.” Essentially, the strong franc created domestic havoc in the little Alp country.

Last week, the Swiss National Bank decided enough was enough. The bank announced that it would cap the value of the soaring franc and, “buy euros in ‘unlimited quantities’ whenever the single currency fell below 1.20 francs,” according to The Wall Street Journal. Within minutes of that announcement, the value of the franc plunged 8 percent against the euro, according to Bloomberg.

Without getting mired in the details, this was an extremely bold move by the Swiss and could lead to, “a currency war, in which a growing band of countries will seek to lower the values of their currencies to protect their economies,” as reported by The Wall Street Journal.

Dramatic currency intervention like this adds one more wrinkle to the uncertain worldwide economic environment. While we can’t control situations like this, we can keep them on our radar and adjust for them within our investment portfolios along the way.

The past week was filled with remembrances of that tragic day 10 years ago when we lost nearly 3,000 of our loved ones and the country lost its feeling of peace and security. We will never forget the grief, the heroism, and the pulling together of the nation as we all tried to heal in the days and months following that fateful event.

Much has changed since then and, in a way, we all lost some of our innocence and perhaps some of our optimism. But, as Americans, we are a resilient nation. We’ve endured tragedy and war before and we always found the strength and the courage to overcome. The pain of the terrorist attacks is still with us, the images still vivid, the effects still lingering, but persevere we do and prevail we will.

While it pales in comparison to the human toll of 9/11 and its aftermath, the U.S. financial markets and the economy have been relatively weak in the years since that day. Here are some examples:

From the terrorist attacks and their aftermath to the sluggish economy, it’s been a difficult 10 years for our country. And, just like it has taken time to process the 9/11 tragedy, it will take time for our global financial system to deleverage and cleanse itself. And as this unwinding continues, there will be setbacks. But, over time, our human spirit will strengthen, our economy will improve, and the world will be a better place.