Talking about a social media hype!

Goldman Sachs got their greedy hands on Facebook, the boy wonder of the early 21th Century 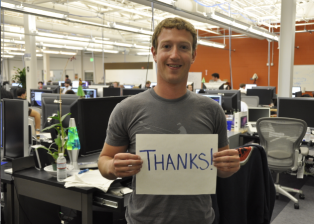 Facebook valued at $50 BILLION? The 20th Century Media World is in uproar? How can a company that is only 6 years old demand that kind of financial respect.? Many still don’t see the emerging picture in media world, is my conclusion.

$50 billion….500 Million subscribers? Maybe not that crazy of a deal, considering that most advertisers these days cannot get a set of eyes for a dollar of exposed advertising. The acquisition of a sale (new customer) is as high as $500 per contact  in certain categories, so $100 per subscriber maybe quite feasible. But the old media world thinks differently.

Facebook has raised $500 million from Goldman Sachs Group and Russian investment firm Digital Sky Technologies, which implies that the social media darling is valued at a staggering $50 billion.

The news media and all those financial reporters who could not find their brains if their fingers were flashlights are outraged. They are comparing it to a new round of the valuations being assigned to Internet companies leading up to the “dot.bomb” crash.
They say that there’s no way a company that relies on nothing more than bits of information – the vast majority of which are summarily ignored by the community that supposedly finds it so compelling – should have a valuation approaching Walt Disney, equal to Boeing and greater than Time Warner.

Guess what? People talk daily about and through Facebook. Don’t know about you but I think I mentioned Disney once or twice in 2010, Boeing probably never and Time Warner, I didn’t even think they were still in business after the AOL shindig.

However, for the sake of argument, I’ll play along and suppose that the $500 million capital infusion is for real and that the $50 billion valuation it implies is correct. Then the question becomes: What does the transaction say about Goldman Sachs, which arranged the deal, and the regulators supposedly overseeing it?

That the 2008 financial collapse on Wall Street in no way shape or form is holding the street back from repeating the scenario that unfolded only a little over 2 years ago. Gordon Gecko is ready for round two.

The structure of the deal

The way I understand the deal is structured, Russian Digital Sky is investing $50 million and Goldman is investing $450 million for a stake in Facebook that they plan to package and resell to investors. That makes Goldman a principal in the deal, which means in very plain terms that they can no longer claim any obligation to the investor (their customer) who bought the other side. It’s important to keep that in mind.

Okay let’s move on to the valuation.

First we should wonder what the Russians are getting for their money, because Facebook is still a private company, which means nothing it does is reportable.

It is clear that that some 1/12 of the world’s population gathers together on the popular social networking site – which now ranks Number One as the world’s most-visited Web site – just imagine the collection of human data that’s stored there, which of course makes Facebook the largest, self-fueled marketing database in human history, 530 million and growing!

Old schoolers, those that still haven’t figured out that we have landed in a new economy, are still holding up signs that question how the giant will ever monetize that traffic? As one pundit said arrogantly: “they face the same old dilemma salesmen have faced since the beginning of time: “How do you convert the “tire-kickers” into buyers.”
Clearly this one has no clue at all that Facebook can virtually turn every faucet of human interaction into a money stream. This person does not understand that if Facebook would ask for a $1 per subscriber contribution, very few of its subscribers worldwide would turn them down. One single dollar, that would mean somewhere in the neighborhood of $500 BILLION in membership fees.

Maybe some of these idiot reporters should come down from their thrones and realize another interesting little aspect of this validation of Social Media.
Yeah, I am talking about Goldman’s involvement. By helping raise $500 million, the firm is doing more than simply pocketing their substantial fees. Goldman is positioning itself for the eventual initial public offering (IPO), which is rumored to be scheduled for 2012.

Would it surprise you to learn if Goldman Sachs has a contractual right to be the manager of Facebook’s IPO. And if that proves to be the case, it would mean Goldman has effectively fronted Facebook $450 million for the privilege of orchestrating the company’s forthcoming IPO – and then gotten its money back by selling its stake in the company off to high-end clients looking to get a piece of the social media giant.

Are the words derivatives or default swaps still ringing in your ears?

Goldman reportedly wants to create another of its “special investment vehicles” – one that would allow a select few additional investors to put as much as $1.5 billion into Facebook. That would mean more fees for Goldman, while also ensuring that it keeps its “investors” outside of the Security and Exchange Commission’s (SEC) public disclosure rules.
Mmmmm does that sounds familiar?
Well…It should, given that special investment vehicles and limited disclosure played a key role in creating the financial crisis that’s still not over and from which Main Street still has not recovered. Never mind the irony that – thanks to a taxpayer funded bailout – Wall Street bonuses are as big or bigger than ever and that it’s already back to business as usual.

Can we talk about conflicts of interest for a minute? According to the one page investment profile Goldman sent to its wealthiest clients, “GS Group may at any time further reduce its exposure to its investment in Facebook without notice to the fund or investors in the fund.”

If that’s not a conflict of interest, I don’t know what is, as this clause would allow Goldman to hedge or trade against the very same clients it’s now putting into the deal. That, in turn, means the firm can exit or burn the house down without warning!

Oh yeah and than the small print which further states that the content of the offering “is not guaranteed as to accuracy or completeness.” Maybe that’s why there’s another line near the very bottom that advises potential clients: “Do not contact Facebook.” News flash: I would. But then again, I would never get an invitation from Goldman Sachs to even be considered for an investment in Facebook.

The game on Wall Street is still the same. Goldman Sachs pays $550 million in fines to settle charges of securities fraud related to mortgage investments last year while pocketing $13 billion in the process of selling said mortgage investments. The SEC is happy with the “monster” fine and Goldman Sachs smiles as they pay $550 million (a 4% finders fee in their calculation) to happily start with the next shenanigan.

We already knew that the pigs are still wearing lipstick and now French kissing the government regulators, who either still have no clue what is going on, or are happy to be Wall Street’s prostitutes at a 4% commission.