The US Government says that Federal Income Tax is voluntary?! Anyone ready to take them up on that one? 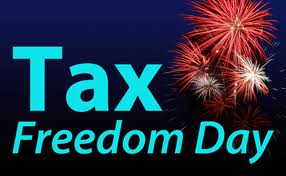 Today is according to some sources the day Americans “celebrate” Tax Freedom Day this year, a mere four days later than last year due to higher federal income and corporate tax collections. That means Americans will work 107 days into the year, from January 1 to April 17, to earn enough money to pay this year’s combined 29.2% federal, state, and local tax bill. For those who get it, isn’t it ironic that yesterday was Emancipation Day, a day to commemorate abolishment of slavery? 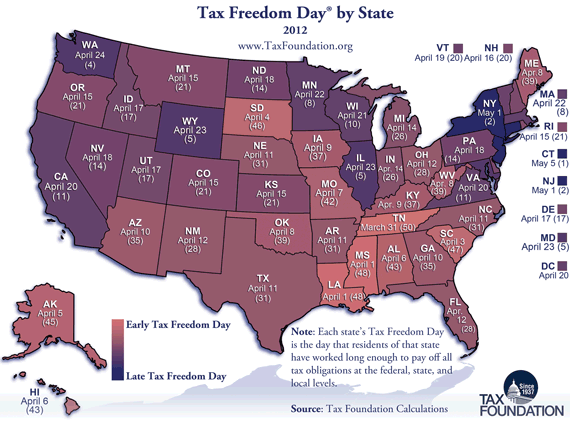 My take on taxes is slightly radical for most and primarily reared by the fact that in 1979 my personal Tax Freedom Day in the Netherlands was September 7. As a result of that burden the next year I moved away, as did many of my peers in those days as we vividly experienced how the parasite overwhelms and kills the host.

The media called it the year of Brain Drain. And that’s where America is going today.

Here’s why. If this year’s budget deficits were included in the calculation, tax freedom day would be May 7 and considering the growing National debt, it is only a matter of time before our Tax Freedom Day here will move to late summer.

And these are taxes to feed a bloated, corrupt government with a danger streak. And to be sure, this is not an isolated gift to the American people. Most governments across the world today are on a fiscal rampage and what concerns me most is that a lot of people have accepted taxation as part of the natural order of things, like rain or day and night. Death and taxes are seen as the two inevitable things in life, and you are a silly idealist – if not a dangerous madman – if you believe otherwise.

I caught a glimpse of the popular CBS sitcom “Two Broke Girls” last night, in which the sentiment was created that it is a proud patriotic and joyful event to pay taxes, almost like an honor. I found it distastefully sad evidence of herd manipulation in the fight for who owns the moral high ground. The state, the media, teachers, pundits, corporations – the entire establishment, really – all emphasize the moral correctness of paying taxes. They call someone who doesn’t do so a “tax cheat.” And that is a sad perversion of the reality because if you give the tax authorities the moral high ground, you’re looking at a communist system in the making. I had a good friend in the Hungarian resort city of Balatonfured who “owned” and worked a vineyard. In the early 1970s the communist government physically took 90% of his harvest and allowed him 10% to live off. That’s what we’re looking at here.

Taxes are, at best, an artifact of a primitive feudal world and actually no longer necessary in an advanced, free-market civilization and my point here is that you can’t give the tax authorities the moral high ground. That’s important because decent people want to do the morally right thing. This is why sociopaths try to convince people that the wrong thing is the right thing.
If an armed mugger or a gang of muggers wanted my wallet on the street, would I give it to them? Yes, most likely, because I can’t stop them from taking it, and I don’t want them to kill me. But do they have a right to it? No. And every taxpayer should keep that analogy at the top of his mind.

Keep in mind that if people really wanted anything the state uses its taxes for, they would, should, and could pay for it in the marketplace. Services the state now provides would be offered by entrepreneurs making a profit and employing people. I understand, and am largely sympathetic, to the argument that a “night-watchman” state is acceptable; but since the state always has a monopoly of force, it inevitably grows like a cancer, to the extent that the parasite overwhelms and kills the host. That’s where we are today in my opinion.

People also once thought the world was flat, that bathing was unhealthy, and that there was such a thing as the divine right of kings. Many things “everyone knows” just aren’t so, and this is one of those. A government – for those “practical” people who think they need one – that stuck to the basic core functions of police and courts to defend people against force and fraud and a military to defend against invasion, would cost a tiny, tiny fraction of what today’s government costs, and that could be funded in any number of ways that essentially boil down to charging for services. As it is now, the average US taxpayer probably works half of the year just to pay direct and indirect taxes. And that doesn’t even count the cost of businesses destroyed or severely hampered by regulations, restrictions, absurd demands and a million other ways governments burden, obstruct, and harass people and businesses.

A better perspective of the road ahead is to look at the real cost of government day. In 2011, Cost of Government Day fell on August 12.  Working people had to toil 224 days out of that year just to meet all costs imposed by government, which was a full 27 days longer than 2008. This year we’re looking at August 21!!
In other words, in 2011 the cost of government consumes 61.42 percent of national income. Looking at the current growing deficits, the US is rapidly approaching the 69% I paid in combined taxes in the Netherlands in 1979. The writing is on the wall.

I don’t believe in utopia, but I do believe our world could be far freer, healthier, and happier than it is today – without any divine intervention, magic, or changes in the laws of physics. Just a different path, every bit as possible as the one we’ve taken to where we are today.