Tell me What Am I Missing Here

Gursky's huge, panoramic color prints have the presence, power and majestic aura of 19th century landscape paintings, without losing any of their meticulously detailed immediacy as photographs.-Calvin Tomkins 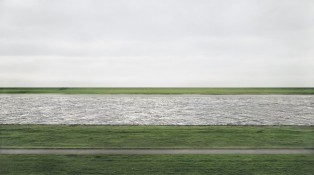 Tell me…is there something I don’t see here? Something I’m missing maybe…like an under-developed sense of artistic refinement?  I woke up this morning to a headline that a 1999 photograph of the Rhine river by German photographer Andreas Gursky had sold for $4,338,500 at Christie’s in New York City, setting a record for any photograph sold at auction.

The story further points out that the photograph titled “Rhein II,” is a chromogenic color print face-mounted to acrylic glass. Aha, I thought, there must be a very special process involved in order to command this kind of money. So in search of widening my knowledge, I learn that the first commercially available chromogenic print process came from Kodacolor, introduced in January of 1942. I learn a lot in a couple of minutes research, mostly about the chemical process and types of paper involved, but most of all that it is the most common type of color photographic printing.

So now I’m on a quest. I had to find out what it was that made an undisclosed buyer shell out more than $4.3 million for a photograph.

It turns out that Gursky’s photographs are large, digitally enhanced and in apparent demand. His 99 Cent II Diptychon, which depicts the interior of a Supermarket with numerous aisles, fetched $3.34 million in 2007, while get this…. second and third prints of the same image caught another respective $2.25 million and $2.48 million!!!

The son of a commercial photographer, Andreas Gursky was always a photographer, but until digital photography made its debut in the early 1990s, he was just talented. It was really the possibilities allowed by digitization that made him find his niche, which the New Yorker Magazine in 2001 called vast, splashy, entertaining and literally unbelievable. Art critic Calvin Tomkins wrote:

“The first time I saw photographs by Andreas Gursky…I had the disorienting sensation that something was happening—happening to me, I suppose, although it felt more generalized than that. Gursky’s huge, panoramic color prints—some of them up to six feet high by ten feet long—had the presence, the formal power, and in several cases the majestic aura of nineteenth-century landscape paintings, without losing any of their meticulously detailed immediacy as photographs. Their subject matter was the contemporary world, seen dispassionately and from a distance.” New York’s Museum of Modern Art added that Gursky’s work was “a sophisticated art of unembellished observation. It is thanks to the artfulness of Gursky’s fictions that we recognize his world as our own.”

When art is put into those words, a simple earthling as myself, may get a tiny glimpse of what art means to different people.
And guess what, Gursky’s panoramic image of the Rhine is just one of an edition of six photographs. Four are in major museums, including the Museum of Modern Art in New York and the Tate Modern in London. Who says there is no money in Arts?