Tennis Elbow‚ The Good, the Bad and the Cures

If you've been playing tennis for a while, you've probably experienced it. Yes, the dreaded T-bo, also known as Tennis Elbow, or lateral epicondylitis. 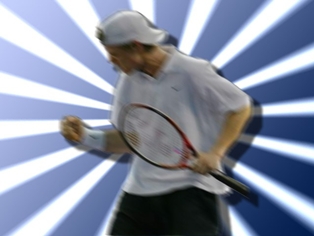 Tennis Elbow: The Good, the Bad and the Cures

If you’ve been playing tennis for a while, you’ve probably experienced it. Yes, the dreaded T-bo, also known as Tennis Elbow, or lateral epicondylitis. Tennis elbow is an inflammation of the tendons joining the forearm muscles to the elbow. Mostly it is the muscles that lift you hand upwards (if your palm is facing the ground). These muscles are used in the spin serve, and to my surprise, in the one-handed backhand. They‚Äôre over used and cause inflammation if you have bad technique. That’s where my T-bow came into the picture.

In this article we’ll look at the common poor tennis techniques that can cause tennis elbow. We’ll also look at why the conventional medical explanation of inflamed tendons, or lateral epicondylitis, often doesn’t lead to recovery and what might be a better solution.

Overusing these forearm muscles is common in less experienced or technically trained tennis players who get the idea that top spin or power is created by wrist action. They then use their forearm to try muscle the ball – creating spin by lifting the hand up at contact, or pulling the hand back at the wrist and then snapping through at contact.

Using the forearm muscles to create spin or power is poor technique for a number of reasons:

If you watch any pro or 4.5 and up player you will notice they open their shoulders and drive into the ball with their hips and legs. Their arm muscles aren’t used for speed and power, they’re used for control. The legs and butt rotate the hips and the abdominals then rotate the shoulders which pull the relaxed arm forward to strike the ball. There are many picture sequences on the internet (which if they aren’t showing in this article is due to copyright reasons) you can look at, or ask me to see the Roger Federer and Juan Del Potro sequences I have in my lesson bag.

Suffice it to say that if you can’t hit the tennis ball with a completely relaxed shoulder and arm, you are not using your biggest ASSets for power and spin generation (excuse the pun, couldn’t help myself).

Typical Tennis Technique Tips (try saying that fast 5 times!)
– Forehand Ground Stroke – Lifting the wrist up and you contact the ball to create spin. This is very common with players who haven’t experienced and integrated using the lower body to generate their power. This is the trap I fell into when I strung my racket very tightly with stiff polyester strings. I was having to hit so hard I was using my forearm to try get the spin on the ball. 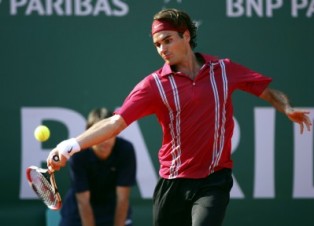 This overly wristy action is also common in people who have played softball or badminton where the wrist is pulled back and then snapped forward. In a power hitter like Federer and Agassi, the wrist does flex backwards at the start of the forward movement of the stoke, but it is not taken back by the muscles of the forearm, or at least not much.
The wrist bends back due to the massive acceleration of the shoulders pulling the arm through. At the start of the forward motion, there is no tension in the wrist (picture above). The wrist is largely slack and bends back with the acceleration at the beginning of the stoke, only to catch up with the rest of the arm and hit the ball in line with the forearm at contact (picture below). 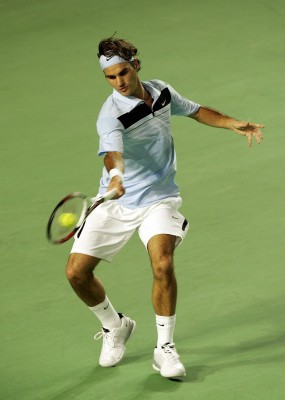 You’ll notice his racket starts below the ball and drives up on the ball. That is what creates the topspin. There is no wrist involved in creating the topspin. Granted, on some low balls close the net some wrist might be used to get extra topspin, but on general groundstrokes, doing this only reduces power and encourages tennis elbow.

– One Handed Backhand – Having too much bend in the arm at the beginning of the swing and then straightening out the arm at contact creates stress on and impact on the elbow joint. The arm should be straight or almost straight through the entire stroke.
– Gripping the Racket too tightly – With correct technique, the racket is balanced when it strikes the ball and you don’t have to hold onto it tightly at all. Try loosening up your grip until the racket almost flies out of your hand. This will tell you whether you are striking the ball cleanly with a balanced racket or not.
– Using too much wrist in your Serve – This is similar to the forehand problem. The wrist should not be primarily used to create power in the serve. The wrist snap in the serve is best used to direct power and spin onto the ball. It gets it’s speed and power from “come on, you can guess this one”. Yes, the legs, butt and abdominals. Since you did so well on that question, here’s another one. “In tennis you hit the ball with your”? Yes, belly button.

Racket speed in the serve comes from bending the legs and torso backwards (the opposite direction from where you want to serve to) and then releasing that bend up and through the ball in a forward whipping motion. The wrist bends back due to the acceleration of the torso and shoulder moving forward, it doesn’t have to be held back with your forearm muscles.

Look at how ol’ Rog is bent backwards in preparation to slingshot his racket up and forwards in a big circle at the ball. 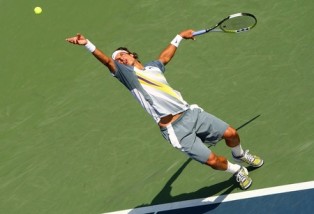 Kinesio Tape
When I got tennis elbow, I started looking around for cures. One of the first I came across was Kinesio Tape. In addition to promoting healing, kinesio tape gives your body biofeedback on how it is using the muscles. With the tape on I immediately became aware that I was using my forearm to impart spin to the ball. I could feel my forearm tense and overuse the forearm muscle. So I went back to basics making sure I was rotating my hips and shoulders first. I practiced hitting with a relaxed forearm and getting my shoulders and legs providing power to the ball. This helped immediately to not aggravate the tennis elbow and give my forehand more power and spin.

Shock absorbers on the forearm
I have a pneumatic forearm band and a hard plastic one made by Epi-point called and epiclasp. While they do help minimize pain and aggravation, they are really only symptomatic and temporary relief. Keep reading for a better solution.

Thera Band
Next I looked at the FlexBar which is based on the physiology principle that tendons experience less stress when performing eccentric motion. This is a fancy word meaning the tendons are lengthening while resisting force. Normal exercise shortens the tendons while under load. In my opinion, you don’t need a flexbar to do the exercises, it just makes it easier. I did the exercises by pushing my hand down with my non-playing hand, or you could hold a piece of pipe and twist it down with one hand while resisting with your playing hand. These exercises helped, but didn’t completely cure my tennis elbow. So I kept looking.

Alternative Solutions
Considering the low effectiveness of studies using acupuncture, rest, physiotherapy and other traditional treatments (including surgery – yuck!) I started looking in other places. Only yesterday I found a simple solution that makes the most sense to me. The reason I am writing about it now is that I am excited about it since it produced results in minutes. And it’s simple and easy to self administer. Here’s the background. Traditional, conventional medicine is based on the silver bullet principle. “Modern” medicine grew out of the industrial revolution which was itself a result of the growth of society out of a conventional, mythic belief system towards a rational, scientific worldview. Ken Wilber goes into this in detail in his many books, which I regard as the best on the planet. If you’re interested  “a Brief History of Everything” is probably a good starting point.

Suffice it to say that modern medicine, growing as it did out of the scientific worldview, has taken a piece-meal, reductionist approach to the human body. Instead of looking at the body as a whole and treating it as one living organism, western medicine looks at the human body as a set of systems that can be further broken down into their component parts. This works to some degree, but it is not the whole truth.

In diagnosing tennis elbow, western medicine looks at the elbow and sees there is inflammation of the tendons at the elbow. That is where the pain is, therefore that is where the problem is and that is where we will solve the problem.. Obviously the cure is to reduce the inflammation of the tendons, which is approached in a typical reductionist fashion. Since inflammation is caused by X chemical in the body, we’ll prevent the body from creating that chemical. Take 2 non-steroidal anti-inflammatories (NSAIDS e.g. ibuprofen) and call me in the morning. Good logical. But partial, and highly ineffective.

Tennis elbow is notoriously difficult to treat, at least with conventional methods. To anyone able to think outside the reductionist western model, the painfully obvious conclusion to the fact that treating the tendons isn’t working, is that the tendons aren’t the problem!

So I happened to come across something called Trigger Point Therapy. This says that overuse of the muscles causes them to form small, contracted knots of muscle fibers. This sustained contraction put a constant stretch the rest of the muscle and on the tendons. This chronic tension sends a message to the brain to relax the muscles, which you then have to push harder to get the same amount of work out of. This is a vicious cycle, and explains why exercises for tennis elbow don’t usually help. Weak muscles are not the cause of the problem. It also explains why treating the tendons will only ever give symptomatic relief – the tendons aren’t the root cause of the problem. The knots in the muscles cause the extra stretch and subsequent irritation to the tendons.

Often there might not even be damage to the tendons. Making the tendons feel irritated is called referred pain and is the body’s self-defense mechanism. Your body refers pain to the area that causes stress on the damaged muscles so that you don’t use that part of your body.

When the trigger points are released, the tension in the tendons and the rest of the muscles returns to normal. Your body then gives them the green light by stopping the pain signals from your elbow.

This Trigger Point Treatment for Tennis Elbow page has one of the exercises shown, but I got the book and have tried most of the other tennis elbow related points and they’re working magic for me so far. If the exercise on that page doesn’t work for you and you’re in the area, give me a call and I’ll try help you with it.

Conclusion
It’s probably time I ended my wandering rant about belly buttons and western medicine. Probably past time. If you have tennis elbow, or golf elbow or plantar fasciitis for that matter, I suggest you check out that trigger point page, so far so good for me.

Good luck, and see you on the court.
Paul