The 1926 Miami Hurricane is even in today's dollars the costliest natural disaster in US history with $157 billion in damages. 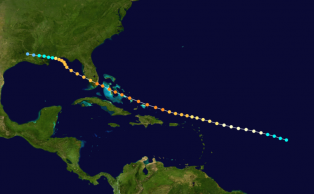 The 1926 Miami Hurricane Put and End to Florida's First Boom

In 1926 the first wave of settlers to booming South Florida was still in full swing. The 1920s was a time of excessive speculation in stocks and real estate and many Americans were borrowing money to buy more stocks and real estate.
There was more money outstanding in loans ($8.5 billion) than there were dollars in actual circulation. And large parts of that money went into developing South Florida. Economic prosperity in the early 1920s had set the conditions for a real estate bubble in Florida. Miami had an image as a tropical paradise and outside investors across the United States began taking an interest in Miami real estate. Due in part to the publicity talents of audacious developers like Carl G. Fisher of Miami Beach, famous for purchasing a huge lighted billboard in New York’s Times Square proclaiming “It’s June In Miami”, property prices rose rapidly on speculation and a land and development boom ensued.

By January 1925, investors were beginning to read negative press about Florida investments. Forbes magazine warned that Florida land prices were based solely upon the expectation of finding a customer, not upon any reality of land value.(?) New York bankers and the IRS both began to scrutinize the Florida real estate boom as a giant sham operation. Speculators intent on flipping properties at huge profits began to have a difficult time finding new buyers. The inevitable bursting of the real estate bubble had begun. 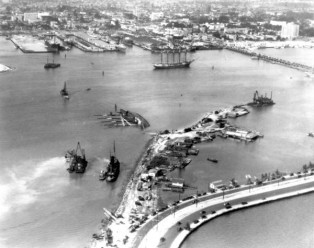 Several disasters like the sinking of the Prinz Valdemar, a 241-foot, steel-hulled schooner, that sank in the mouth of the turning basin of Miami harbor and the 1926 Miami Hurricane that came ashore in the early morning hours of September 18, making landfall just south of Miami between Coral Gables and South Miami as a devastating Category 4 hurricane on the Saffir-Simpson Hurricane Scale, took the image of Paradise away from South Florida.

Most of the coastal population had not evacuated, partly because of short warning (a hurricane warning was issued just a few hours before landfall) and partly because the “young” city’s “imported” population knew little about the danger a major hurricane posed. A 15-foot (4.6 m) storm surge inundated the area, causing massive property damage and some fatalities. Then, as the eye of the hurricane crossed over Miami Beach and downtown Miami, many people believed the storm had passed. Some tried to leave the barrier islands, only to be swept off the bridges by the rear eyewall. “The lull lasted 35 minutes, and during that time the streets of the city became crowded with people,” wrote Richard Gray, the local weather chief. “As a result, many lives were lost during the second phase of the storm.”

Inland, Lake Okeechobee experienced a high storm surge that broke a portion of the dikes, flooding the town of Moore Haven and killing many. But this proved only to be just a prelude to the deadly 1928 Okeechobee Hurricane, which would cause a massive number of fatalities estimated at 2,500 around the lake alone in a time something could have been done shoring up the levies.

The 1926 Miami Hurricane is in today’s dollars estimated as the costliest natural disaster in US history at $157 billion in damages, almost twice as much as Katrina and 3 times as much as Andrew. The storm’s enormous regional economic impact put an end to the Florida land boom of the 1920s and pushed the region on an early start into the Great Depression.

The University of Miami in Coral Gables, opened its doors for the first time just days after the hurricane passed and it is generally assumed that the University’s athletic and football teams were nicknamed the Hurricanes in memory of this catastrophe.
Another interesting tidbit from these days: The Miami Hurricanes won both their home and away games against the University of Havana in Cuba with a freshman team!