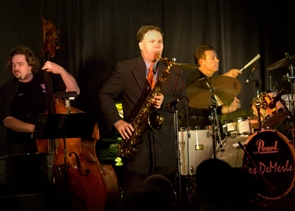 Generous helpings of traditional, big band, be-bop, and Latin jazz cascaded throughout Amelia Island this past week, as the 2008 Les DeMerle Amelia Island Jazz Festival presented its strongest offering to date, thanks in part to a kind nod from the weatherman. Festival organizers, along with a dedicated group of volunteers and appreciative audiences, could not have been more pleased with the quality of music and the picture perfect climate conditions.

Beginning with a free concert featuring the University of North Florida Jazz Ensemble on a very comfortable, overcast afternoon Sunday, October 5, in Amelia Park, the 2008 Les DeMerle Amelia Island Jazz Festival proved again that it can deliver the best in first-rate musicianship. The initial concert had an all ages audience of 400+ swinging and singing and was highlighted by guest appearances from drummer extraordinaire and Festival Artistic Director Les DeMerle and his talented wife, vocalist Bonnie Eisele, both of whom made multiple appearances at shows throughout the week.

October 9th‚Äôs Latin concert in the showroom at the Palace Saloon, a first time event for the festival, succeeded brilliantly as an SRO crowd danced into the night to the tight, percussive rhythms of Impacto Latino, a multi-faceted 10-piece ensemble from Jacksonville. The group showcased the music of the great Tito Puente and drew consistent standing ovations, particularly when its drummers, joined by DeMerle, broke out into an all percussion jam that never lost its fiery intensity.
Throughout the week, DeMerle and Eisele, with the assistance of various Festival musicians and volunteers, took their knowledge and expertise of jazz into area schools, reaching out to students at the Fernandina Beach Middle and High Schools, Yulee Middle School, the Amelia Island Montessori School, and St. Michael‚Äôs Academy. ‚ÄúWe love discussing this vital American music with and performing for young people,‚Äù said DeMerle, ‚Äúand it is a great thrill to watch their faces light up as they get into the unique sounds of jazz.‚Äù DeMerle and company also made a presentation at the Osprey Village Senior Living Community on Amelia Island, where he said ‚Äúwe were astounded by the reaction‚Ä¶two hours past their normal bedtimes, the audience was recreating a New Orleans second line parade, complete with waving handkerchiefs, all around the room. It was great fun.‚Äù

On Friday, October 10, the festival moved into its traditional evening venue, the lovely courtyard at St. Peters Episcopal Church and kicked off with a lively, eclectic set from the Dynamic Les DeMerle Band, which included Eisele and special guests Doug Matthews (piano), Al Waters (tenor sax), and multi-instrumentalist Dr. Bill Prince. Setting the tone initially with a roaring take on the Dixieland classic, ‚ÄúChina Boy,‚Äù the band delighted with a gorgeous arrangement of Freddie Hubbard‚Äôs ‚ÄúFirst Light,‚Äù which featured double flute work from Prince and Waters and melodious flugelhorn solos by Marvin Ferrebee. Eisele shined with a poignant reading of the Hoagy Carmichael/Johnny Mercer classic, ‚ÄúSkylark,‚Äù and closed the set with a Brazilian Carnival standard, ‚ÄúTristeza.‚Äù In between, the group paid tribute to Ray Charles with crowd-pleasing takes on ‚ÄúGeorgia On My Mind,‚Äù and ‚ÄúUnchain My Heart.‚Äù Up next, Orlando‚Äôs Dirty Martini, led by exceptional tenor saxophonist Jeff Rupert and featuring scat singing vocalist Michelle Amato brought a samba influenced shade to the evening‚Äôs fare. The band pulled off a beautiful rendition of the Anthony Newley classic, ‚ÄúThe Candyman,‚Äù while Amato scored with an innovative version of ‚ÄúTenderly.‚Äù Rupert dazzled during a lightning fast Django Reinhardt tune, ‚ÄúDark Eyes,‚Äù before he and Amato delivered a spot on rendering of the Nancy Wilson/Cannonball Adderley standard, ‚ÄúSave Your Love For Me.‚Äù But the evening may well have belonged to the superb Bill Allred Classic Jazz Band, also from Orlando (‚Äúthe jazz capital of the world,‚Äù Allred joked during his opening remarks), which was making its second appearance at the festival. Beginning with three powerful Duke Ellington chestnuts, ‚ÄúIt Don‚Äôt Mean A Think If It Ain‚Äôt Got That Swing,‚Äù ‚ÄúEast St. Louis Toodle-oo,‚Äù and ‚ÄúThings Ain‚Äôt What They Used To Be,‚Äù Allred‚Äôs eight man group showed they could stand with any musical aggregation on the planet as they burned through a diverse set that included Dave Brubeck‚Äôs ‚ÄúTraveling Blues,‚Äù ‚ÄúUp Up and Away,‚Äù ‚ÄúBugle Call Rag,‚Äù and ‚ÄúLove For Sale.‚Äù For a grand finale, DeMerle‚Äôs band combined with the Allred ensemble to roar through two Count Basie classics, ‚ÄúSplanky‚Äù and ‚ÄúJumpin‚Äô At The Woodside.‚Äù

The festival continued under the stars at St. Peter‚Äôs Saturday evening, opening up with The Amelia Island Jazz Festival All-Stars, first as a trio with notable pianist Michael Levine, bassist Jamie Ousley, and DeMerle, performing ‚ÄúCookin‚Äù At The Corner‚Äù and Rogers & Hammerstein‚Äôs ‚ÄúIt Might As Well Be Spring.‚Äù Prince returned to add a stirring version of ‚ÄúAvalon‚Äù before Eisele and the band wowed the capacity crowd with ‚ÄúSwingin‚Äô Shepherd Blues,‚Äù ‚ÄúMaking‚Äô Whoopee,‚Äù and a swinging cool take on the Nat King Cole homage to fun times, ‚ÄúHit That Jive Jack.‚Äù Festival headliner Harry Allen, a world renowned tenor saxophone virtuoso, hit the stage with a sure handed set that ranged from highly melodic to sultry to downright full blown horn renderings that bore the influence of his idol, Stan Getz. Backed by the stellar rhythm section of DeMerle, Ousley, and Levine, Allen was also joined by his longtime friend, Jeff Rupert, for an intricate, breakneck jaunt composed by Ben Webster, ‚ÄúSound Investment,‚Äù after which Prince returned and and the three saxophonists reeled off a stunning tribute to the late great tenor man, Johnny Griffin, with his ‚ÄúThe Blues Up And Down.‚Äù Next came the much-anticipated festival debut of the U.S. Navy Band Southeast, a 19-piece traditional big band that more than delivered with strong arrangements and tasteful solos. The band cranked up with a polyrhythmic version of Dizzy Gillespie‚Äôs ‚ÄúA Night In Tunisia,‚Äù and scored with Ellington‚Äôs ‚ÄúTake The A Train,‚Äù and ‚ÄúIt Don‚Äôt Mean A Thing,‚Äù plus Glenn Miller‚Äôs ‚ÄúIn The Mood.‚Äù Band vocalist, Valerie McKendrick, brought the crowd to its feet with a stirring reading of ‚ÄúAmerica the Beautiful‚Äù before the band joined forces with other festival headliners to create a super grand finale.

For festival attendees desiring more swinging music, late night jam sessions, featuring musicians from both the Friday and Saturday shows at St. Peter‚Äôs, went on until the wee hours at Jack and Diane‚Äôs across the street. ‚ÄúA perfect night cap to the wonderful concerts,‚Äù said one happy patron.
The festival concluded Sunday morning, with a Dixieland jazz brunch at The Beech Street Grill, featuring The Spare Rib Six and Bonnie Eisele, sumptuous food, and a potent portion of great New Orleans Jazz.

DeMerle summed up his busy week by saying, ‚ÄúThis was perhaps our best year yet, and we very much appreciate the support we‚Äôve received from our sponsors and volunteers, and the Amelia Island community as a whole. We look forward to returning next fall October 4 -11 with more top notch musicians and another exciting schedule of great jazz.‚Äù

All proceeds from the week‚Äôs events benefit the Amelia Island Jazz Festival, a not-for-profit 501(c)(3) Corporation, and its newly established jazz scholarship program.
For more information, contact the Festival Hotline at (904) 504-4772
Or visit the website: www.ameliaislandjazzfestival.com