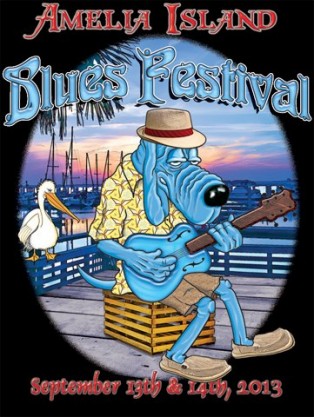 After a good bit of soul searching and feedback from other festival locations after last year’s 3 day event on Main Beach, the Amelia Island Blues Festival Committee decided to move the event to downtown, bring it back to 2 days (actually one evening and one day) and tie it closer to the community, restaurateurs and establishments with live music in town. This has created the following tentative schedule and line-up, which admittedly features an epic melting pot of Chicago Blues, Mississippi Delta Blues and Blues Rock/Funk.

The event is planned for September 13 and 14 with a free show line up for Friday the 13th???, when the Fernandina Beach High School Blues Band with Roger “Hurricane” Wilson will open up for blues master Albert Castiglia at 6pm. The stage will be set up on Centre Street as on a regular Sounds on Centre Event.

Then on Saturday the 14th, the Festival will continue on the Riverfront Parking area, starting at 11am.
Here is the schedule and line up as confirmed by the committee:

Here is John with his band on a Blues Cruise with “Love Gone Crazy”.

5:15  –  6:30  Ana Popovic
Emerging blues rocker born in Belgrade and currently living in Amsterdam Ana lets it loose in this funky blues “Can you stand the Heat” from her album with the same title out in April.

Advance tickets for Saturday are $20 p/p and will be available on the festival website www.ameliaislandbluesfest.com starting March 15 – as will be VIP tickets.