This is not to blame the victors. It is, however, to point a finger at the 85% of the electorate that couldn't be bothered to vote. 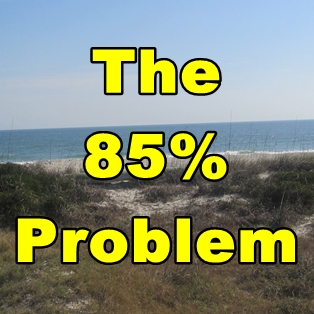 Back in November we had an election, followed by a run-off election that resulted in two new Fernandina Beach city commissioners. Since then we have heard a lot of crowing from those who claim “the people” have spoken. What exactly does that mean? I went to the Supervisor of Elections website to check the election statistics and found some interesting facts:

• In combining both precincts, the final vote tallies were:

The Corbett and Pelican victories were clear and unambiguous. And I do not mean to suggest that they were not properly certified as winners of their elections. But what I do find interesting is to compare the votes they captured against the total registered voters in the city. The percentage of support then changes dramatically. Corbett was elected by 14.5% of the city’s registered voters; Pelican was elected by 11.8% of the registered voters.

This is not to blame the victors. It is, however, to point a finger at the 85% of the electorate that couldn’t be bothered to vote. There has already been major changes in the city with the departure of City Manager Czymbor, and if the rumors are true, there will be many more. While all of us are pretty clear about what the new commissioners don’t want (i.e., infrastructure investment that requires additional funds in the form of taxes or franchise fees), we are not clear at all about what they do want. What is their vision for the city? Do they support the same goals that citizens articulated going back to Vision 2000 and just question the means? Or are they looking for something altogether different. We do not know. They don’t hold town meetings; they don’t write opinion pieces for the local paper; they don’t even articulate their reasons for their votes at public meetings.

So going back to my first paragraph: who were “the people” who really spoke in this last election? I maintain it was that 85% that never showed up. Perhaps they felt all the candidates were a sorry lot; or maybe they were so happy with what they had, they felt there was no way any election could impact them. No matter what, they let 15% of the electorate determine our future. Thanks a lot, folks.