The Amelia Concours d'Elegance increased its annual gift to Spina Bifida of Jacksonville to $80,000 for 2014, an increase of 33 percent. 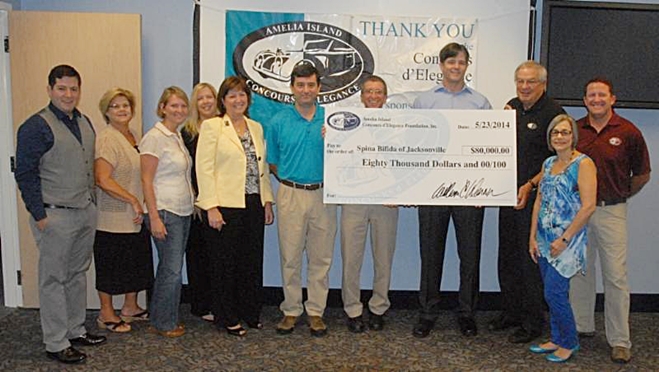 Amelia Island, FL – The Amelia Concours d’Elegance, a 501(c)(3) charitable organization, increased its annual gift to Spina Bifida of Jacksonville to $80,000 for 2014, an increase of 33 percent.

Celebrating its 20th anniversary in 2015 the Amelia Concours was founded in 1996 to serve charities on Florida’s First Coast and to bring an award winning, world class concours to America’s east coast.

Founder Bill Warner’s only condition upon creating the Amelia Concours two decades ago was that it benefit charity. Since its founding the concours has donated over $2.5 million to such local pivotal charities as Community Hospice, the Navy-Marine Corps Relief Society, Shop With Cops of Fernandina Beach and Nassau County and Spina Bifida of Jacksonville.

“This year we added Micah’s Place, the only Certified Domestic Violence Center serving Nassau County, Florida to our roster of charities,” said Bill Warner, founder and Chairman of the Amelia Island Concours d’Elegance.

“Today we were able to increase our annual giving to Spina Bifida of Jacksonville by a third,” said Warner. “This is the primary reason the Amelia Concours exists. We don’t measure success by the number of spectators, or car count, but by our giving. More and bigger checks to our charities tell us it’s been a good year.”