What happened to the first "rule" of good architecture, fitting into the existing neighborhood look? I guess nobody really cares anymore. 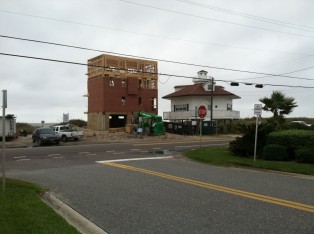 The Dutch are known for expressions that do not beat around the bush. Racy, very direct and they spare no one directly involved in shenanigans that call for public attention. One of these expressions says : “Ben je nou helemaal van de pot gerukt?”, refinely translating as: “Did you get pulled off the toilet while you were not paying attention?” or are you completely out of your freaking mind.

I would like to introduce that expression in the case of the city official here in the Fernandina Beach’s Building department who permitted this monstrosity at literally spitting distance from Katie’s Light on South Fletcher next to Beach Access Nr. 6.

As the Innkeeper at Amelia Oceanfront Bed and Breakfast on the other side of public parking lot, I was obviously confronted with this monstrosity quite early on in the game, especially when I actually caught the concrete crew that made the pilings, hooking up a hose to my outside spicket to use our water.

Thank God my mom taught me very early on in life to count to 10 before getting stupid, and I did. And while in that process, I was wondering who in his right mind was going to build a beachfront home on that ridiculously small postage stamp. Worse yet I never thought there was actually a building lot wedged between Katie’s Light and the public parking area.

But apparently some 20 years ago, as far as the story goes, this idiotically small piece of land was sold to someone from “up north” who had moved to Miami and apparently has now plans to come settle or vacation here. Also according to hearsay, construction on this lot was successfully held off under legal pressure for more than 16 years. So the moron who gave a permit for this ugly box should still be part of our recent peripheral vision.

I do stress hearsay, because the owners of this monstrosity under construction never thought it necessary or appropriate to invite the immediate neighbors to a cocktail or even put a construction announcement in our mailboxes. Smart but devious. I run a B&B next door and my guests certainly do not appreciate being woken up by early morning nail guns and backhoes beeping. But that is a temporary nuisance. What’s way worse is the permanence of the structure!

As far a integration, in a small beach neighborhood like ours, a little communication would have been not only the proper, but most definitely the smarter thing to do. But if course if you’re an arrogant SOB, why care! We look after each other in this neighborhood. I cook breakfast for Miss Cody at least twice a week. She is 94 and lives in the house across the street from the Inn, already since 1958! When frost sets in like last week, we call to make sure all precautions to prevent pipe breaks are taken.

So arriving at this point let me start turning attention to whomever allowed this new piece of architectural wasteland to be built, because that is the person I would like to address with my Dutch expression in the opening paragraph: Have you lost your freaking mind?

Did anyone in the building department seriously look at the plans, before giving out the permits? Did it not occur to you that this design would stand out like a blunt ugly square in a neighborhood of nicely porched and nooks and crannied era architecture.

A roof seat overlooking the ocean

My neighbor Paul just purchased Nassau County Tax Collector John Drew’s mother’s home on the corner of New York and Fletcher, with impressive plans to renovate the home and add a roof deck with ocean panoramas. He actually on occasion tied a beach chair to the chimney and sat for hours on his roof last summer figuring how to make his new beach home take in as much of the ocean as possible. Since the monstrosity across the street has reached its maximum height, I haven’t seen much of Paul.

Did the Pencil pushers in City Hall Make a Design Exception and if so WHY… ?

Of course it’s way too late now to change anything and David Caples is looking at a substantial loss of value with this “thing” sitting on his rental house’s doorstep. Question is if anyone from the building department actually came out and figured that this thing was going to be an eye-sore. I for one knew at the first sign of construction and definitely when they started drilling concrete pillars for the foundation, that we were looking at a tall square building being raised. Not that surprising, since the building lot was minuscule in square footage.

Dozens of people asked me what I thought about this eyesore next to our charming B&B and David Caples’ Memorial for daughter Katie. Stories and comments were written in the local news leader, but nobody questioned the powers behind this building being allowed to be erected.

I kept quiet because I don’t like to judge on first impressions and listened to supposedly wiser, long term locals, who prefer “to wait and see”. Maybe there would be some architectural feature that would justify and redeem this thing being placed in a neighborhood of very traditional Florida oceanside design.
Well now that the outside is nearing its finish (4 obnoxious color plaques have been attached to ocean and street side, presumably to test sun light effect), this square wooden building of questionable durability in inclement weather conditions, is pretty much a reality in the neighborhood. I just hope that this part of the island never experiences a real category 3 or higher hurricane, because this “thing” will projectile wipe out the entire neighborhood.