It would be a miracle if trillions of dollars of debt could be wiped out with one stock market crash and be succeeded by a new bull market driven by another large offering of credit by the Fed. 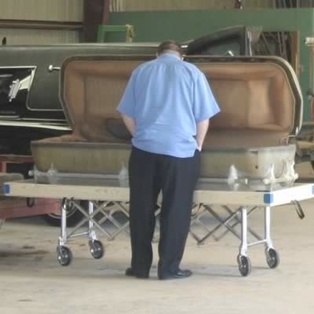 While often wrong, Bernanke is right about the recession. It‚Äôs almost over. But a casket shaped depression is about to replace it. There has been much discussion about this recovery, whether it will be a ‚ÄúU‚Äù, ‚ÄúV‚Äù or a ‚ÄúW‚Äù shaped recovery. The answer is none of the above. It is going to be ‚ÄúC -shaped‚Äù recovery, but not as in the letter ‚ÄúC‚Äù but as in casket.

It would be a miracle if trillions of dollars of debt could be wiped out with one stock market crash and be succeeded by a new bull market driven by another large offering of credit by the Fed. But such a central bank-engineered miracle today is impossible. Capitalism‚Äôs natural cycles derive from central banker‚Äôs unnatural infusion of credit into previously free markets. The subsequent distortion causes market demand to expand (which everybody loves) only to be followed by the inevitable contraction‚Äîwhich everybody hates.

Usually, central banks wait until previous levels of excess credit have been absorbed in an economic downturn before embarking on a fresh round of credit creation. This time, however, it is different. This time, the cumulative buildup of debt over previous cycles where contractions were cut short to minimize economic pain and attendant political consequences, is now so large that any contraction is sufficient to bring down the extraordinary backlog of debt built up over previous cycles.

The current contraction is more than sufficient to do so as it is more severe than any downturn since the 1930s; and despite the frantic attempts of central banks to contain the cumulative forces unleashed by previous cycles of credit and debt, the enormous but fragile paper-based economy built by central bankers‚Äô paper money is now collapsing.
To hopefully prevent the collapse from reaching its catastrophic end, central bankers have now intervened far earlier and with far more credit hoping to prevent the day of reckoning. A reckoning soon to be evidenced by an historic deflationary depression that will wipe out all accumulated un-payable debts, albeit at the cost of a functioning world economy.