I would like to decide at my own discretion when and where a senior discount comes in handy. 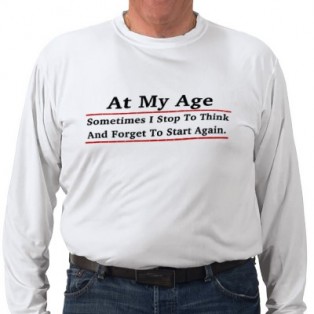 Multi tasking is for the young of heart

$6.97! That’s what the kid behind the counter at Dairy Queen said to me.
I examined my pockets after handing him a $5 note and pulled out a dollar, some lint, a quarter, two dimes and something that used to be a Winn Dixie receipt in colder, less sweaty days.
I started to head back out to the car to grab some change when the kid with the spiky hairdo said the hardest thing anyone has ever uttered to me without ending up on the floor.

He said, “It’s OK. I’ll just give you the senior discount.”
I turned to see who he was talking to and then heard the sound of change hitting the counter in front of me.
“Only $4.97,” he continued cheerfully.
I stood there stupefied. I am 61, not even close to retirement age yet.
A mere child among boomers!

Senior citizen?
I took my burger and sundae and walked out to the truck wondering what was wrong with kids these days…not even a nod of acknowledgment I gave him.
Was he blind?
As I sat in the car, my blood began to boil. Old? Me?
I’ll show him, I thought.

I opened the door and headed back inside. I strode to the counter, and there he was waiting with a smile.
Before I could say a word, he held up something and jingled it in front of me, like I could be that easily distracted!
What am I now? A toddler?
“Dude! Can’t get too far without your car keys, eh?”

I stared with utter disdain at the keys.
I loudly began to rationalize in my mind!
“Leaving keys behind hardly makes a man elderly! It could happen to anyone!,” my mind screamed.

I turned and headed back to the car.
I slipped the key into the ignition, but it wouldn’t turn.
What? I thought irritated.
I checked the various keys on my chain and tried another. Maybe I had used the one to my wife’s car,

Still nothing.
That’s when my peripheral vision started to notice purple beads hanging from my rear-view mirror.
I had no purple beads hanging from my rear-view mirror.
A few other objects came into focus:
Some beach flip flops, a colorful towel and what could be a bikini.
A partially eaten doughnut waon the dashboard.
Faster than you can say ginkgo biloba, I flew out of the alien vehicle.

Moments later, I was speeding out of the parking lot, relieved to finally be leaving this nightmarish stop in my life.
That is when I felt it, deep in the bowels of my stomach: hunger!
My stomach growled and churned, and I reached to grab my burger, only it was nowhere to be found.
I quickly swung the caround around the rondabout at Slider’s, gathered my courage, and strode back into DQ one final time.

There Spikehead stood, draped in youth and black nail polish.
All I could think was, What is the world coming to? All I could say was, “Did I leave my food and sundae in here?”

Honestly at this point I was ready to accept a Boy Scout to help me back to my vehicle and then go straight home and apply for Social Security benefits.
Spikehead had no clue where my food was however.

I walked back out to the car when a teenage girl came up to me and demanded my attention with a big beautiful young smile.
She was holding up a dripping sundae and a bag. “I think you left this in my truck by mistake.”
I took the food and drink from this ultimate embarrassment and sheepishly apologized.

She offered these kind words: “It’s OK. My grandfather does stuff like this all the time.”
Do I still need to explain how I got a ticket doing 85 in a 35 mph zone.

As sure as life is sometimes a conundrum, I was racing some punk kid in a red Toyota Prius that looked like a sports car…
and no, I told the officer, I’m not too old to be driving this fast.
As I walked in the front door, my wife met me halfway down the hall.
I handed her a bag of cold food and a $300 speeding ticket.

I guess the good news is that I actually found my way home, because you know how it is with men and asking for directions…..