The Fall of Jefferson County Alabama 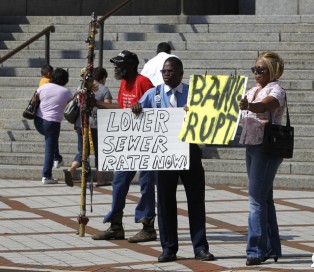 The first of a long line of community bankruptcies?

The massive bankruptcy of Jefferson County, Alabama and Nancy Pelosi’s appearance on Jon Stewart’s Daily Show  last night has once again confirmed that the safest and best jobs in America are being a lawyer or a lobbyist and if you can manage to be both, you’re absolutely set for life. Of course this should not come as a surprise considering Washington’s relentless contribution to a never ending introduction of laws and regulations, objected or supported by a lot of lobbying cash.

I watched Nancy Pelosi squirming on Jon Stewart’s Daily Show last night, as she deviously tried to come up with an adequate explanation of why Paul Volcker’s original 3 page letter to Obama about Banks Too Big To Fail in 2009, became a 10 page inclusion in the Dodd-Frank Wall Street Reform and Consumer Protection Act when it went to Congress last year and is now a 298 page DRAFT, that includes more than 1,300 questions on some 400 different topics. She essentially said: We, (America), would not understand! “When a document like that goes through congress,” she said, “the language changes.” It’s all about legal interpretations.
I have no idea where the whole Reform Act will go from here now that banks and even Paul Volcker are calling the proposal too complicated and too costly, but I can guarantee that more lawyers and lobbyists will be involved in this essentially useless effort of trying to reign in an industry that has long gone global, far beyond the reach of Congress.

Another eye-opener in the our world of lawyers and lobbyists was the announcement yesterday that Alabama’s largest county, the one that includes the capital city of Birmingham, voted to declare a $4.1 billion dollar bankruptcy. Court proceedings started this morning at 10am local time, just to make sure that this was a serious move.

It started all back in the mid 1990s when a federal court forced Jefferson County to begin a huge upgrade of its outdated and overwhelmed sewer system in order to meet federal clean-water standards. County officials used bonds to finance the improvements. Outside legal advisers and lobbyists  suggested a series of complex deals with variable-rate interest that were later shown to be laced with bribes and influence-peddling. (who would have ever thought…?) and the upgrade became a fact.

But every time global credit markets started to struggle, increasing (adjustable!) interest rates caused loan payments to rise quickly and the county could no longer meet its payments. Since 2008 Jefferson County has been trying to avoid filing bankruptcy over the growing debt, as it faced an additional annual shortfall of as much as $50 million in its operating budget because Alabama’s State Supreme Court struck down a major local tax as unconstitutional. No problem said Wall Street investment banks including JP Morgan and arranged complex financial deals using swaps. But the fees, penalties and bribes increased a project that was worth about $1.2 to $1.5 billion to $3.2 billion. Too big of a nut to crack according to the latest batch of local leadership, claiming that elected officials close to the deal had encouraged repayment scheduling with very low early payments so long as peak payments occurred after they left office. Not an uncommon practice in politics, also called kicking the can (of worms) down the road.

Between Washington and America’s Heartland, the legal profession in this country has taken over daily life on both end of the spectrum. Jefferson County is just the latest “victim” of being played against both ends: a Federal court forces a community to upgrade its sewer system at a considerable expense and a State Court declares it unconstitutional to raise the taxes required to pay for it.
From a 1995 Lawsuit on behalf of the Cahaba River Society against Jefferson County, the course of action in this sordid affair has been initiated, manipulated and encapsulated by lawyers and lobbyists, from writing the initial plan to representing the bankruptcy in court.

There is no doubt that lawyers and lobbyists are sitting royally on the throne in the Republic called America.