The French Are Coming…!!!

Here is your chance to view 2 french Navy Schooners arriving on Amelia Island in celebration of Jean Ribault settling here 450 years ago. 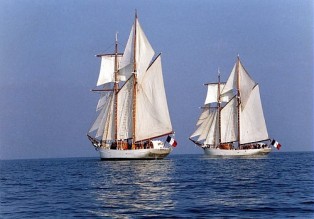 These schooners can be viewed on Saturday at the Fernandina Harbour

Four hundred and fifty years ago around this time of the year, some natives might have wondered about the ships on the horizon when French Sailor and settler Jean Ribault decided to step ashore and build a small settlement on our island which he had called Ile de Mai. The year was 1562.

Until then there had been little interest among the early discoverers of the new world. That would soon enough change however and Ile de May changed flags no less than 8 times before it finally became Amelia Island.
To commemorate the start of it all, we are welcoming two Atlantic crossing French Navy Schooners (L’Etoile and La Belle Poule) this weekend at the docks of Fernandina Beach and in honor of the decision to make the first mainland stop of their historic Atlantic crossing here on Amelia Island, we will party: French style, which means games, good food and lots of throat caressing fluids.
This is quite a different welcome than 450 years ago when French and Spanish were contesting supremacy in the area. Without going into the details once again of the cruel life created by religion in those days, it should be noted that in true sense of history, Amelia Island was settled 3 years before St.Augustine, when Ribault built a settlement here called Fort Caroline.
The bloodbath in “the name of the Lord” at Matanzas led to the annihilation of the residents of the island’s first settlement and in the process created yet another historical abberation that qualifies for the “He who Wins, Writes History” trophy. 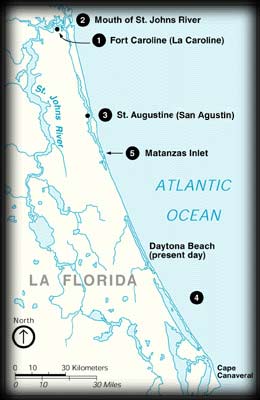 The fight over the title " oldest settlement in America"

This time around however, the French sailors, after tying up to our docks, will find pleasantness, music, wine and good food and an invitation to participate in a Spring Pétanque tournament on coming Sunday, in which the “local” Petanqiers, coming from Tallahassee, St. Augustine and Amelia Island, hope to playfully “massacre” the sailors in a competitive encounter at the downtown riverfront.

The 123 ft long sister ships were built in Fécamp, France in 1932.
The “Belle Poule” was named after the original 26-gun frigate that started the French intervention in the American War of Independence in 1778 in its famous battle with England’s “Arethusa”. Both ships served the Free French Forces during the Second World War and since serve as training vessels.
They came to Florida in honor of the 450th anniversary of French Capt. Jean Ribault’s arrival. After celebrations in Jacksonville on May 1st, they will head to Savannah, Annapolis, Philadelphia and New York. Fernandina Beach welcomes the sailors for a well deserved weekend of R & R after their 7 week voyage across the Atlantic.

How Amelia Island became their first stop on the Mainland USA?

One reason, and one reason only. That reason is called Philippe Boets; the same guy that brought us the game of Pétanque and the Dutch Bells on the Waterfront a couple of years ago. Philippe read about the history and the Schooners sailing to the “New World” and climbed in the phone to arrange for our island to get its proper place in the historic line-up. And…he pulls it off once again. I won’t bother you with all the logistics involved in having two foreign Navy schooners dock in a US port for a couple of days of R&R. Most people would walk away from it at one point or another in the slow and frustrating process. Not Philippe Boets.  The man is just remarkable and I’m proud to call him my friend.

Here is the celebration program for this weekend.

Fri  April 27
At 4pm (irrespective of ships arrival time)
Brief welcome by:
● Ms Arlene Filkoff, Mayor of Fernandina Beach.
● Mr François Kloc, Consul of France in Jacksonville.
● young singers from St Michael Academy.
at the north pier of the FB Harbor Marina.
Sat  April 28
Ships are open to the public.
From 9 to 11am and from 2 to 5pm.
Visits are free.
Sun  April 29
Petanque (French bowling game) tournament.
From 12:30 to 6pm
Local teams from Amelia Island, Jacksonville, St Augustine and Tallahassee will take on the French sailors.
At the south end of the Marina parking lot.
Free to the public.
Wine, beer, food and lots of French music.
Around 10pm. Ships depart
PS: Did you know that Fernandina Beach once back in the 1860’s had a French Mayor who developed the production of Olive Oil on the Island?  His great grand children just visited me at the Amelia Oceanfront Bed and Breakfast. Quite a fascinating story. More about that next week.