The Future for Solo Travel is Bright

In the hotel industry alternatives to "based on double occupancy" has found financial variations that until now have eluded the cruise ship industry. With Norwegian Epic's single studios that may going to change now. 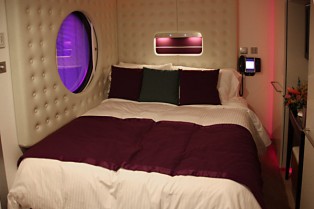 Epic Studio on the Norwegian Epic for solo travelers

If you have ever been or are currently a solo traveler, you know that there are no more annoying words in travel pricing than “based on double occupancy.” Even though in the past 20-30 years a significant trend has been moving towards satisfying the needs of singles, many industries are still penalizing people for being single in a couples world.

Newly launched cruise ship sensation the “Norwegian Epic” dealt with the problem head on and included in its floor plans a significant number of single studios. Their motivation was the recognition that we’re living in a world in which singles are a growing entity, whether couples have become so professionally entangled that they prefer separate vacations or the plain truth that these day not everyone considers being part of a couple as the answer to life’s ups and downs. Fact is that there are many more traveling singles these days, as a matter of fact a full one quarter of Americans traveling domestically or abroad these day travel single.

Even though hotels still harbor the reputation, it is primarily in the cruise industry that solo travelers are still considered second hand passengers. Until the Norwegian Epic, which sails out of the port of Miami with weekly Caribbean itineraries announced, that it would be offering single studios. Yet, the dreaded single supplement remains the norm on cruise ships, with solos paying as much as double the fare for one person if they don’t share a stateroom,” reported the LA Times recently.
Those who specialize in singles travel say solo travelers are treated like second-class citizens.

And by far the most-voiced complaint is about the single supplements on cruise lines. Norwegian’s move “may have awakened the industry to demand,” insiders say but they don’t expect other lines rushing to follow suit, if only because staterooms on most ships currently being built, are prefabricated as doubles.
For the cruise lines, it’s understandably all about the bottom line: If a ship is filled to capacity, more people are spending in the bars, the casino, the premier restaurants and for shore excursions.
Norwegian Cruise Lines admits that it is taking a bit of a financial hit, but they’re betting on attracting a whole new demographic. The numbers are there to proof it; one in five Americans has taken one of more cruises, yet only one of twenty singles has, because they balk at paying for two, says Norwegian, adding that they are sold out on a lot of their sailings.

Each Epic studio stateroom is 100-square-feet and has a full size bed plus a flat-screen TV and private bath. There’s a common area reserved for those occupying a studio stateroom that’s called the Studio Lounge that offers coffee, cocktails, snacks as well as a large-screen television and concierge service. Each cabin also has color-changing lighting options that allows a passenger to change the lighting depending on the time of day or his or her mood.  There’s even a “love” setting for romantic nights at sea. No idea what love lighting looks like, but if it works, it could mean the next time you book a cruise, you’ll have to go back to a cabin or stateroom for two. Fair warning!