This show is not for the mild mannered - expect to be rocked out of your comfort zone by more than one "F-bomb" being dropped on the audience. 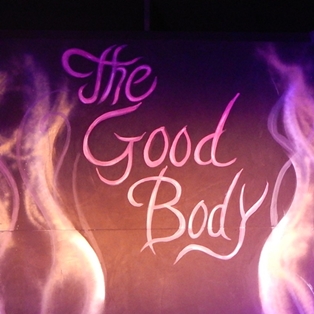 I had the opportunity to catch the final dress rehearsal of Eve Ensler’s The Good Body at Amelia Community Theatre.

The Good Body has moved up from Ensler’s Vagina Monologues, and this time focuses on her forty-something belly and her mid-life obsession to have a good body, including a flat stomach.

As Eve travels around the world she finds herself in body image conversations with other women like Helen Gurley Brown of Cosmopolitan fame, an aging model with a plastic surgeon husband, a woman she meets in India working out on the treadmill, and more.

The show is laugh-out-loud funny taking socially placed values of women head-on, but it also stirs up emotions when some of these women disclose personal, and often uncomfortable memories.

You’ll learn from women who have had liposuction, breast reduction, and faced the buttocks spread. You’ll meet a wise African tribal woman, a Lesbian, and an Afghani woman, and you’ll never think about bread, kale, ham or ice cream the same way again.

Aimed at women and the men who love them, this show is not for the mild mannered and you can expect to be rocked out of your comfort zone by more than one “F-bomb” dropped on the audience.

The show will run on Saturday evening, May 24th at 8:00 PM, and once more at 2:00 pm on Sunday afternoon. Friday night’s show has already sold out… and now that I’ve seen the play, I suggest you buy your tickets right away because the other two shows are likely to sell out, too!