The Good, The Bad and the High Interest Credit Card

The word credit, as described by the dictionary, means: confidence in a purchaser's ability and intention to pay, displayed by entrusting the buyer with goods or services without immediate payment. 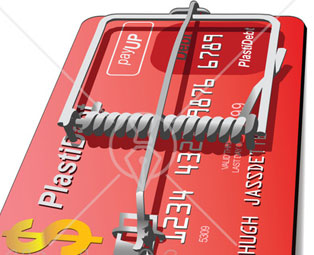 Credit cards have been the mainstay for American spending since their inception in the early 1900‚Äôs.¬† These were mostly store credit cards that could only be used for that particular store’s merchandise, but they were in fact credit cards.¬† Credit cards have been viewed as the saving grace for some and absolute hell for others.¬† Many have revered the credit card concept as the safest means of spending that has ever been devised, while others have taken the extended credit lines and grossly over spent¬†with no means of easily repaying their instant debt.¬† Whatever side of the conversation you’re own, I think we all can agree that credit cards are as much a part of today‚Äôs society as cash.

The word credit, as described by the dictionary, means: confidence in a purchaser’s ability and intention to pay, displayed by entrusting the buyer with goods or services without immediate payment.¬† This statement still holds even today and sums up exactly what a credit cards does, with a couple of twists.¬† Along with a line of credit comes the time line in which it has to be repaid, and the amount of interest that the card company charges for use of that credit.¬† Interest rates vary from card to card and the amount of time the credit is being used.¬† This was a huge issue in the early 1980‚Äôs when someone finally figured out that they were being charged 25+ percent by their card company while others were only charging 10%.¬† Since then the race has been on to find the best combination of credit and interest charged for each particular individual, each trying for the lowest possible interest rates while maintaining a high line of credit.

We have seen many companies that have offered 0% financing for 12 months while other cards offer their clients low rates¬†all the time, just to gain their business.¬†¬†Whatever the case¬†is, no one wants to pay for a high interest credit card. The word credit, as described by the dictionary, means: confidence in a purchaser’s ability and intention to pay, displayed by entrusting the buyer with goods or services without immediate payment. Up until this current financial debacle few of us did.¬† Today is a far different story than what we‚Äôve seen in the past.¬† Many top shelf customers are seeing interest rates in the double digits with no end in sight.¬† Most of the department cards that are offered come standard with a 19.99% annual interest rate with no possibility of negotiating it lower.

I recently had a conversation with a good friend that has excellent credit and has become accustomed to the lower interest rates of the past.¬† As we were talking he explained to me that a large Christmas purchase he was considering came with this high rate and he just simply refused to be a part of it.¬† He made the statement that not only does he get the pleasure of paying a 7% tax, but then 19.99% in interest also.¬† This really spiked my curiosity as I wanted to know just what he was purchasing and how the interest was working out to be exactly 19.99%. The item he was considering was a $2000.00 television that he had planned on paying off within 3-4 months and didn‚Äôt want to pay the additional high interest for using the store’s credit program.¬† I then asked if it was ok to pay the item off early without penalty.¬† Not only did he know the answer, which was no, but he also had the paperwork to show me the specifics of their program.¬† This store, as most are, offer a revolving credit line to qualified buyers to be used anyway you see fit at their store.¬† The interest was the 19.99% but with no pre-payment penalty, meaning you could pay the card off at anytime with no additional charges for doing so.¬† The program was a simple interest credit plan and works like this; the percentage rate is based on an annual revolving total at the end of each particular month.¬† In my friend’s case he was to incur a $2000.00 charge with a 19.99% interest rate.

When I presented this scenario to my good friend a big grin hit his face and his next stop was the store where his most beloved TV would soon be his.¬† So the next time your considering a purchase on a credit card with high interest consider a few things, is it simple interest and is there no penalty for pre-payments.¬† What is the true monthly interest rate and what time frame will you be paying that amount off.