The Hazards of a Florida Summer

From spiders to snakes and from gators to mosquitos, knowing about Florida's summer nature hazards is a good way to prepare for warm weather pleasure. 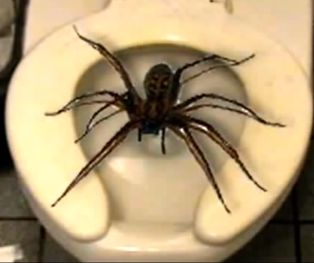 When I saw this story once again (since 1999) going around on Facebook warning us that there is a NEW POISONOUS SPIDER IN THE UNITED STATES, I felt inclined to educate the ignorant on the hazards of a Florida Summer. As the story goes, the venomous ‘two-striped telamonia’ spider lurks beneath toilet seats in public restrooms ready to bite you in the butt and kill you. False says SNOPES

But now that the weather has almost overnight turned from winter to summer, a lot of critters are anxious to reintroduce themselves into our lives. Whether indoors or outside, venomous spiders are a part of Florida living, as are snakes, gators, yellow flies, yellow jackets, hornets and mosquitos and here at the beach, we also entertain the nuisance called no-seams, during dusk especially.

So what do we need to be aware of?

Summertime is perfect to be barefoot outside, but of course, some of those buggers will also make their way into our homes, where many of us are barefoot more often. My bare feet are stuck underneath my computer desk as I type this and on occasion I nervously rub them together, to shake off whatever may be lurking down there!! Just in case.

A particularly troublesome bug is the spider and feet aren’t the only body parts they attack. There are only less than a handful of deadly spiders in the U.S., most famously the Black Widow, which has been spotted in 49 states. (Alaska still appears to be safe.)  But other spiders can also produce a very itchy bite that seems to take forever to go away and sometimes leaves a (semi) permanent mark.
Since nobody wants to run to the doctor every time an insect or arachnid stings or bites, for cot reasons alone already. But spider bites can be serious, and it’s therefore a good idea to learn how to identify those bites and what kind of treatment is best. In addition to itching and pain, some spider bites can cause skin damage, infection, muscle aches, cramping throughout the body, and chest and abdominal pain.
And yes, some people have died from spider bites.
The hobo spider is a non-native species of spider that originally came to the United States from Europe. The spider is found in the northwest portion of the country, and probably arrived in the 1920s, getting into the country accidentally in packages and crates that were shipped from overseas. The hobo spider is brown with no special markings, but it has a potentially dangerous bite that produces distinctive symptoms.

Spider bites can be deadly and painful. It’s important to be able to recognize spider bite symptoms quickly after they appear. Starting spider bite treatment early can make all the difference. By looking at some pictures of spider bites and reading a little advice you can be way ahead in the event of getting bit.

For everyone living in the U.S.,remember there are only three types of potentially deadly spider bites in the U.S.:

The Brown Recluse likes to hide in boxes, books, and other hard to reach places. They are often found around human habitations, outdoors under rocks and bark as well as indoors in houses, schools, sheds, and barns. The brown recluse is about 1/2 inch long. It is brown and bears a violin-shaped dorsal stripe on its cephalothorax.Their bites can be mild to serious and occasionally fatal. As of 1984, at least 5 deaths had been reported from their bites in the USA. Their hemolytic or cytotoxic venom is dangerous because of its toxic effect on cells. The toxins in the bite kill the cells surrounding the puncture, producing a black gangrenous spot. Often, the skin proceeds to peel away from the area around the wound, exposing the underlying tissues. In extreme cases, an area 6 inches across can be severely affected and, since the wounds are slow to heal, they leave a very unpleasant scar.

Other symptoms can be:

Florida has four species of venomous Widow spiders, of which two, the Southern Black Widow and the Brown Widow may be found around buildings. The Northern Black Widow is found only in the Florida Panhandle and makes its web at the end of low tree branches. The Red Widow is mainly found in sand scrub habitat in central and south central Florida.Their venom is neurotoxic (affects nervous system).

A bite victim may feel the following symptoms:

• Painful rigidity in abdominal muscles
• Tightness in the chest
• Increased blood pressure
• Rise in body temperature
• Nausea and Sweating
• Death is uncommon but may happen in the elderly or very young usually from asphyxia 14-32 hours after being bitten.

Dry Bites: As many as half of all people bitten by hobo spiders will have no symptoms. This is because the bites are “dry”, meaning that the spider failed to inject any of its venom into the person.

Early Signs: When venom is injected into a bite, the area will become numb within 15 minutes, with other parts of the body, such as the tongue, possibly feeling numb as well. It will begin to turn red, and become swollen and hard within 18 hours.

Blistering: After a span of 24 hours, the hobo spider bite will start to blister in the middle of the wound. During this time, the victim may experience bad headaches and suffer from visual or auditory hallucinations.

Serious Symptoms: The blister will break open on the second day and ooze fluids, eventually scabbing over in about 3 weeks. In severe cases, after 2 to 3 days the area can become black, and in 10 days the flesh in the region of the bite may rot, requiring surgical intervention.
Scars
The hobo spider bite will leave a scar. In some instances, it can be as long as 2 or 3 years before the bite heals completely.

Here are a few hints on how to identify a spider bite.

If you feel pain when the spider bites, it’s likely a black widow spider bite, whose bite is often but not always painful. You may also develop severe body aches and fever.
A brown recluse spider bite is a slight sting at best. Most of the time you feel nothing. They hide in or under boxes, under your bed sheets, in your clothes. The first you know about it is the pain that develops several minutes to hours after the bite.
As a brown recluse spider bite progresses it takes a nasty turn. You may not know when it a brown recluse bites you, but when the bite area becomes red, blistered, or black you know it’s a brown recluse. The area starts out small, and the redness spreads. A black spot of dead tissue develops in the middle of the redness. This dead tissue can be anything from small and superficial to deep and large—sometimes enough to warrant a skin graft when everything’s said and done. As the tissue dies, the area becomes very painful.

Now the hobo spider can cause skin damage, but less so than the brown recluse, while the black widow spider bite causes a red spot that’s sometimes hard to see, but another symptom will be much more obvious; it usually causes painful muscle aches and cramping throughout the body for one to three weeks.

If at all possible, get to a doctor. If you can’t, consider the following:
If you think the spider was a brown recluse or hobo spider:
keep the wound cool and slow your breathing. This will help slow the venom’s spread: Apply ice, and keep the area at heart level or above.
Even though bites are rarely fatal, secondary infections can quickly turn so. The next step you need to do is make sure you do everything possible to prevent infection.
As the black layer of dead skin (eschar) sloughs off, treat the wound as you would any other, by keeping it clean and covered and applying antibiotic ointment or honey. Some large wounds take several weeks to heal. If it starts looking infected, you’ll need oral antibiotics.

Take an over-the-counter pain reliever.
If you think the spider was a black widow take a pain reliever like ibuprofen or aspirin for the muscle cramps.
Within minutes to hours, a black widow bite can lead to severe chest and abdominal pain mimicking appendicitis or a heart attack. It can make your blood pressure go up and may need to be treated. (Possible signs include an quickened pulse and a flushed face.)
If you can’t get to a doctor, rest to try to lower the blood pressure.
The good news is that these days, thanks to anti-venom, it’s extremely  rare to die from a spider bite and those that do are typically caused by an allergic reaction or a severe secondary infection.
That being said, most people are still terrified of spiders and shake out their sheets before hopping into bed.

Last but not least, I’d suggest, if it’s got eight legs and bit someone, try and recover the critter, no matter how small, and give it to medical staff when being treated so it can be properly identified.

Now there are a dozen other spiders in the State that are intriguing if not fascinating to learn about HERE at http://floridabackyardspiders.com