Why science still has no answer over nature's wisdom. Respectable Centennials speak out about why 2010 will be a fierce year presented to the hurricane belts by mother nature. 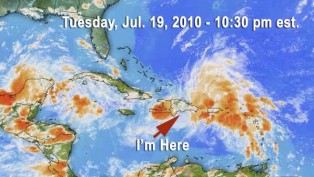 As some of you may know i’m currently in the Dominican Republic on family / work visit. The looming tropical low that formed over the US Virgin Islands yesterday is showing signs of organization and a tropical depression or possible storm may be in the forecast for Wednesday or Thursday which triggered my curiosity of what our elders here in the DR had to say about heightened tropical activity.

It was rather a revealing wisdom that even for a “seasoned hurricane battered me” rang clear in my ears. I know the SearchAmelia publisher “buried” Mr. Common Sense yesterday but there are still pockets of wisdom left.

Although my Spanish is still in the developing stages and “old Spanish” is even more difficult, the message was clear:” we’ll see an exceptional Hurricane Season this year”. All 4 centennials and 3 respectable late ninety-ers had the same story and…logic.

If their observation is scientific, I leave up to those that require proof that the globe is round and the earth is circling the sun, but the reasoning I got was chilling the least to say.

Even for a lush tropical island like the Dominican Republic where rain is not uncommon the amounts of rain have been staggering in the last two months. Everyone agrees that the amounts of rainfall are exceptional and only seen in such quantities every 30-40 years.

All of my questioned sources, boy and what sharpness of memories I was exposed to,  point to the years 1979 when hurricanes David (cat. 5) and Hortense, 1966 Hurricane Ines cat. 4 and 1930 San Zenon cat. 5 who devastated Santo Domingo had exact similar circumstances as the 2010 soaking weather.

The air temperatures are actually mild for this time of the year although the humidity is extreme, nothing like in Florida, but still exceptionally high.

5 out of my seven interviewees made another observation that struck a cord in my 20 years Caribbean Hurricane experiences: ” When oranges provide 3 harvests before the 6th month is over the abundance cannot last throughout the year as it will wilt the trees before reaching the fifth harvest”.

The orange trees are in their third harvest right now which is two months too early (mid september is normal while the fourth harvest is beginning to mid December.

I know, I sounds very unscientific, yet who are we to question mother nature and can force it to tick like the atomic clock.

These lovely old folks I spoke to today still fear nature and respect its forces, yet leave their faith up to the good Lord, while we scientific buffs try to trick with the “magic” of logic we just buried with Mr. Common Sense.