The Idiocy of it All

From that point on, the story becomes sketchy, which the police charging the above accusations and the New Yorkers claiming police brutality and abuse. 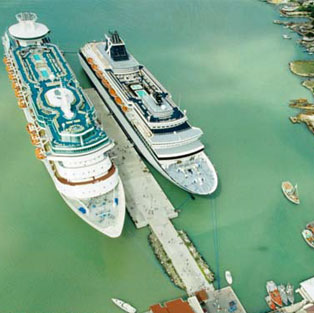 One Ship Less in the Port of Antigua

Idiotic and irresponsible behavior leads to a complete tourism destination suffering badly. It began on last September 4th with the Carnival Victory pulling into the cruise port of St. John, the capital of the Caribbean Island of Antigua in the West Indies.

Six cruise visitors from New York got off the ship for a visit around the island, 4 women and 2 guys. By the time the Carnival Victory pulled anchors later that afternoon, the six were in an Antiguan jail accused of battery, assault, indecent language, malicious damage, resisting arrest and wounding several Antiguan Police Officers, apparently at their St. John’s Police Station.

And the reason?
A dispute over a $100 cab fare that was originally quoted as $50 by cabby Joey “Hungry Bird” Medica. When the six refused to pay the additional $50, Hungry Bird decided to have the Royal Antiguan Police Force deal with the matter.

From that point on, the story becomes sketchy, with the police charging the above accusations and the New Yorkers claiming police brutality and abuse. As always, the law gets the upper hand; passports were surrendered, bail was set at $5,000 each and a couple of days of Antiguan jail time was the initial result.

Well not really!
It all escalated as lawyers were retained, court dates were set and the economic fall-out of this irrational idiocy (the way wars get started) grew to now an estimated $6 million. Why?

Well Carnival Cruise lines, already not too happy with Antiguan hospitality and port facilities, took the opportunity to pull Antigua from the roster in favor of St. Maarten. The projected loss of income is $5.6 million annually. In spite of a high powered team of Antiguan authorities headed by the Minister of Tourism taking an emergency trip to Carnival’s Headquarters in Miami, the cruise line’s decision was final.

After four weeks of testimony that included several days of negotiations about a plea bargain (imagine the cost), the 6 were sentenced a couple of days ago to pay fines totaling close to $3,600 to the injured officers instead of doing jail time.

Whooptedoo!
Let me see, 3 women and 2 guys (charges were dropped against one of the women) from New York beat up the officers in St. John’s main police station. I want to know where these gals work out! Anyway, the only 3 reasons I’m writing about this fallacy is to create some understanding about tourism and how it affects both visitors and locals to a point where clear heads are hard to find.

1. Antigua is suffering from a huge blow delivered to them by one Texan called Allen Stanford who scammed the island and a lot of investors worldwide in a $10 billion dollar Ponzi recently. He operated this out of Antigua where many unknowing Antiguans were not only employed by his holdings, thousands of others were depositors in his now defunct bank. It was a very raw deal that happened just 6 months ago. It also did not help sentiments towards Americans in general. Fair or not fair, that’s unfortunately how the world of ignorance operates. 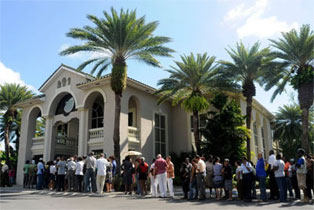 Stanford Depositors trying to get their money back

2. Another reason I have, is to explain that after more than 25 years of living in the West Indies, including St. Thomas, St. Croix, St. Maarten and many visits to Antigua, I can honestly say that crooked taxi drivers are all around. There is only one way visitors can avoid these altercations: negotiate the fare up front and pay up front and always with a licensed cab driver. Avoid the gypsies.

3. Amelia Island’s economy is much dependent on tourism dollars. Quite often I hear derogatory and downright insulting remarks by some locals made towards visitors who don’t know how to negotiate a roundabout, drive slower than the already slow speed limits, park awkward, leave structures on the beach and more. Before any of these remarks reach levels of idiocy as it did in Antigua, realize that a visitor has many choices where to spend his money. I’m not saying accept anything they do. Just realize there is a fine line in approach and every approach has a different consequence.

A little leniency goes a long way in preserving sanity.

This is what Antigua is left with after this whole idiotic episode:
• A loss of at least $150,000 income per week
• Another blow to its reputation
• A group of physically and mentally damaged police officers
• One missing taxi driver by the name of Joey “Hungry Bird” Medica – at least I hope he went underground before his cabby buddies realize all the losses he caused.

I wonder if Chief Magistrate Ivan Walters realized the “cost of justice” when he told the tourists that they could have prevented the case from taking this long if they had pleaded guilty from the start.

And the tourism authorities in Antigua held up their head high when they walked out of Carnival’s offices in Miami by saying, “The meeting was very cordial and ended on a positive note. Issues related to the development of the cruise industry in Antigua and Barbuda were addressed, which included transportation costs, taxi operators and security improvements.”

Well that’s good to know when Carnival finally will decide to return to the island of 365 beaches….many years from now. Beware Amelia Island, tourism is a fickle thing, that¬†needs attention and patience every day.