The Magic of Water Displacement Number 40

WD-40 attracts fish. Spray a little on live bait or lures and you will be catching the big one in no time, so it says. 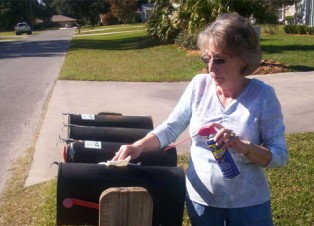 Spending a Day with WD-40

I have no idea if all the following claims are true, but since it’s Saturday, for many of us a day to take care of things around the house and the equipment, I decided to give you a heads up by publishing the apparent amazing virtues of WD-40. In addition WD-40 claim number 39 could be used as an illegal way to attract a winner Kingfish in the SKA Tournament of Champions today. So if you want to call your buddy on the water and fill him in on this one, he may bring back the winner. I don’t know. I’m just passing on information, not guarantees. The Tacoma Wheelmen’s Bicycle club once assembled a list of 1,997 “unofficial” uses for WD-40, but since unpublished the list.
The story as it was sent to me started out as follows:

I had a neighbor who bought a new pickup. I got up very early one  Sunday morning and saw that someone had spray painted red all around the  sides of this beige truck (for some unknown reason).  I went over,  woke him up, and told him the bad news. He was very upset and was  trying to figure out what to do…. probably nothing until Monday morning, since nothing was open. Another neighbor came out and told him to get his WD-40 and clean it off.
It removed the unwanted paint beautifully and did not harm his paint job that was on the truck. I was impressed! WD-40  who knew? ‘Water Displacement #40’.

The Origins of WD-40

The product originates from a search for a rust preventative solvent and degreaser to protect missile parts. WD-40 was created in 1953 by three technicians at the San Diego Rocket Chemical Company. Its name comes from the project that was to find a ‘water displacement’ compound. They were successful with the fortieth formulation, thus WD-40. The Convair Company bought it in bulk to protect their atlas missile parts. Ken East (one of the original founders) says there is nothing in WD-40 that would hurt you. On a personal note: When you read the ‘shower door’ part, try it. It’s the first thing that has ever cleaned that spotty shower  door. If yours is plastic, it works just as well as on glass.
And when you’re done with that chore, try it on your stove top. It will be shinier than it’s ever been.

Here are some uses you may want to try out today: 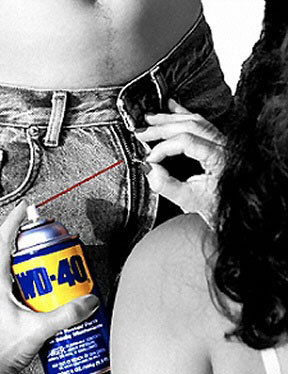 8.  Loosens stubborn zippers.
9.  Untangles jewelry chains.
10.   Removes stains from stainless steel sinks.
11.   Removes dirt and grime from the barbecue grill.
12.   Keeps ceramic/terra cotta garden pots from oxidizing.
13.   Removes tomato stains from clothing.
14.   Keeps glass shower doors free of water spots.
15.   Camouflages scratches in ceramic and marble floors.
16.   Keeps scissors working smoothly.
17.   Lubricates noisy door hinges on vehicles and doors in homes.
18.   Use WD-40 for those nasty tar and scuff marks on flooring. It doesn’t seem to harm the finish and you won’t have to scrub nearly as hard to get them off. Just remember to open some windows if you have a lot of marks to clean.
19.   Bug guts will eat away the finish on your car if not removed quickly! Use WD-40!
20.  Gives a children’s playground gym slide a shine for a super fast slide.
21.   Lubricates gear shift and mower deck lever for ease of handling on riding mowers.
22.   Rids kids rocking chairs and swings of squeaky noises.
23.   Lubricates tracks in sticking home windows and makes them easier to open..
24.   Spraying an umbrella stem makes it easier to open and close.
25.   Restores and cleans padded leather dashboards in vehicles, as well as vinyl bumpers.
26.   Restores and cleans roof racks on vehicles.
27.   Lubricates and stops squeaks in electric fans.
28.   Lubricates wheel sprockets on tricycles, wagons, and bicycles for easy handling.
29.   Lubricates fan belts on washers and dryers and keeps them running smoothly.
30.   Keeps rust from forming on saws and saw blades and other tools.
31.   Removes splattered grease on stove.
32.   Keeps bathroom mirror from fogging.
33.   Lubricates prosthetic limbs.
34.   Keeps pigeons off the balcony (they hate the smell).
35.   Removes all traces of duct tape.
36.   Folks even spray it on their arms, hands, and knees to relieve arthritis pain.
37.   Florida’s favorite use is: ‘cleans and removes love bugs from grills and  bumpers.’
38.   The favorite use in the state of New York, it protects the Statue of Liberty from the elements. 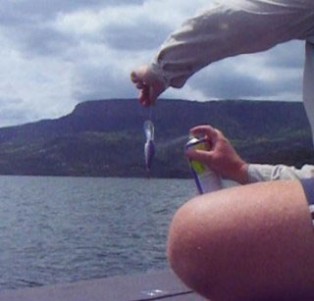 It's illegal in many States

39.   WD-40 attracts fish.  Spray a little on live bait or lures and you will be catching the big one in no time.  Also, it’s a lot cheaper than the chemical attractants  that are made for just that purpose.  Keep in mind though, using some chemical laced baits or lures for fishing are not allowed in some states.
40.   Use it for fire ant bites.It takes the sting away immediately and  stops the itch.
41.   WD-40 is great for removing crayon from walls.  Spray on the mark and  wipe with a clean rag.
42.   Also, if you’ve discovered that your teenage daughter has washed and dried  a tube of lipstick with a load of laundry, saturate the lipstick  spots with WD-40 and rewash.  Presto!  The lipstick is gone!
43.   If you spray WD-40 on the distributor cap, it displaces the moisture and allows the engine to start