The Many Faces of a Pumpkin [video]

This past weekend, my hubby and I were set on carving a pumpkin, but settled on making this cool video instead! 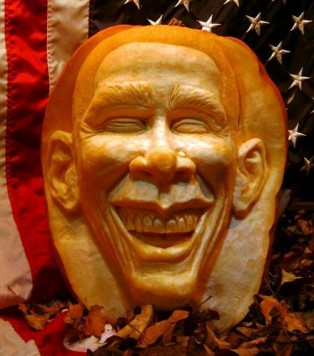 Every year, my hubby and I do the same things in preparation for Halloween: buy candy, put up orange lights and spiderwebs, buy more candy, plan a party, eat the candy, play spooky CDs for our trick-or-treaters. You get the picture. Well, this Halloween, my hubby and I thought we’d do something a little different.

After having window shopped for just the right pumpkin and tools at our local pumpkin patch and grocery stores, I truly thought we might take a stab at carving a pumpkin this year. Since neither of us had never so much as attempted the task, we both agreed it could be both fun and satisfying. So, we decided to research it a bit, on the internet – big mistake!

To our surprise, there is a plethora of talented carvers out there whose edible works of art are, well, intimidating, to say the least. Alas, the planning stages of our jack-o’-lantern journey never exceeded NPR Science Friday and Google Photos of finished products.  On the bright side, as it turns out, relaxing together, in the coziness of our computer chairs by the warmth of our laptop, gazing upon all the radiant carving creations made by others more able, was just as rewarding and romantic as doing it ourselves. Plus, there was no pumpkin puree to cleanup!

Invite your loved one over and check out the video below – you’ll see what I mean.   =)