University of South Florida Public Health released a study that shows a significant spike in accidents at intersections that use cameras to catch light runners. 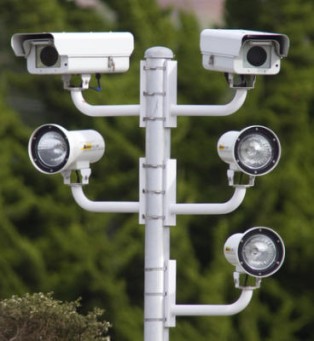 Most of the time a trend in the US moves from West to East it is said. If that is true then we will see in about 7-8 years from now that all these impressive and slightly scary cameras we see on top of our traffic lights lately, will face the same destiny as the ones in Los Angeles.

Last week the LA Times reported that the Los Angeles Police Commission has voted to kill the city’s controversial red-light camera program, rejecting and debunking claims that the system makes streets safer while costing the city nothing. The police department says the cameras help reduce accidents, but largely by deterring drivers with intentions to run red lights or make illegal turns.
Critics of the technology however question officials’ accident data, saying the cameras instead of deterring, actually cause rear-end collisions as drivers slam on their brakes. And then there is of course a group that likens the cameras to Big Brother tactics designed to generate revenues.

More than 180,000 motorists have received camera-issued tickets since the program started in 2004 but the commission estimates that the program costs between $4 million and $5 million each year while bringing in only about $3.5 million annually. Okay number crunching time here. The entire take over a seven period period is less than $25 million, which means that and average red light ticket in Los Angeles cost in the neighborhood of $135 per infraction. Don’t know how much it is here on island but since an acquaintance got a $180 ticket for littering (cigarette thrown out of the window) recently, I want to assume the penalty is a bit more than in LA. An interesting side note: The vast majority of tickets were for illegal right-hand turns.

In any case, members of the public who attended the meeting urged the commission to do away with the cameras, which trigger seemingly boundless frustration and anger among drivers in traffic-obsessed LA. ‘It’s something that angers me every time I get in my car,’ says Hollywood resident Christina Heller. ‘These cameras remove our fundamental right in this country to confront our “accuser” as there is no recourse other than going to court, and they do not do anything to improve safety.'”

The Los Angeles Police Commission has voted to kill the city’s controversial red-light camera program, rejecting claims that the system makes streets safer while costing the city nothing. Unless the City Council takes the unusual step of stripping the Police Commission of its authority over the issue, the red-light cameras installed at 32 intersections throughout the city will stop operating within a few weeks and that places Los Angeles at the center of a national debate about the cameras.
If the commission’s action stands, L.A. would become the first major U.S. city to pull the cameras. Several others have vowed never to install them, including Anaheim, where voters overwhelming banned them last year.
With fiscal crises on the rise in cities and states, the debate on pros and cons will soon be academical as their legality is increasingly questioned in some states. A case was argued before Iowa’s Supreme Court only yesterday.

Are they working as intended?

Not really, say researchers at the University of South Florida Public Health who released a study that shows a significant spike in accidents at intersections that use cameras to catch light runners. Why? Drivers are more likely to slam on their brakes when the signal turns yellow, causing tailgaters to ram into them. The USF study focused on Florida  also found that traffic fatalities caused by red-light running were not at all increasing. In fact, they account for less than 4% of the state’s yearly traffic deaths.

The study notes:
“The injury rate from red-light running crashes has dropped by a third in less than a decade, indicating red-light running crashes have been continually declining in Florida without the use of cameras.”
Is this study exclusive to Florida – with its high number of elderly drivers? Actually no, similar studies in Virginia, North Carolina and Ontario found similar increases in crashes at intersections where cameras were installed. As for studies that show a decrease in accidents, many were funded by the Insurance Institute for Highway Safety, a trade group for the insurance industry. Insurers tend to profit from red light cameras, because revenues go up with increased citations and accidents.

In my native Holland we had traffic and speeding cameras installed more than 35 years ago. Within 10 years it showed not to prevent but increase accidents, for the simple fact that drivers go full on the brake or speed up more with an increase in accidents as a result.

Beyond that mere fact, there is the question of extenuating circumstances. I once moved out of the way of an ambulance, into the intersection. That triggered the red light camera. When I was blocking traffic, the safest thing to do was continue with an illegal right on red. I got 2 tickets. The camera could not testify to any of this happening, where a cop would/should/could have been able to. Then there is the question if you were actually driving the car or not and who’s to proof or disprove that.

I don’t how many times in the last five years I have seen people speed up at local traffic lights, especially on 8th Street , because another loaded lumber truck behind them tried to barrel through the yellow light.

Lastly, there is a reason why the courts in general are not in favor of tough enforcement of payment of these photo tickets, because there is too much grey area and when all is said and done a lot of these tickets end up in the hands of everyday collection agencies without even a mark on a driver’s license.
Just another waste of tax payer’s money.