The Survival of Crypto Currencies

The dismantling of Liberty Reserve last week is a sure sign that Bitcoin is next on the Government's Wanted List. 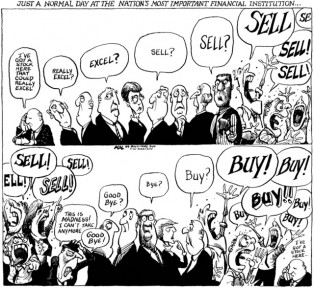 Click to enlarge: The Market Madness in its Comic Reality

At first I wanted to just write a comment to Mark Dennis’ article yesterday about Bitcoins and Tulips, but as I started hammering away on the keyboard, I realized that a comment would not suffice because there is so much more to consider when talking about the Bitcoin effort to pull currency transfers away from direct government control into cyberspace.

For example there is a lot of confusion out there about money supply and inflation/deflation. There is also the diminishing role of the US dollar as the global reserve currency. Then there is inflation and deflation and the notion that the Feds are printing money, which in reality is probably not the case, but since their operations are so murky and contradictory that not even congress gets an honest answer, rumors accelerate among hoi polloi – since this term was officially used in the hit TV series “The Big Bang Theory” by Sheldon Cooper’s character- I can now safely use it to better describe the populace than the somewhat degrading word ‘sheeple’.

So before turning to Bitcoin and its, in my humble opinion at least, inevitable demise and subsequent replacement by a better protected e-currency option, I would first like to address some of the currency concerns that have surfaced in the past five years or so.

First the money supply issue and the Federal Reserve

For a long time I walked in the camp that professed that the Feds were printing money in such absurd quantities that it would ultimately bankrupt us all into Armageddon. By applying logic however and some hints from a top banker friend in London I am now inclined to think that “the Fed is printing money” is a broad misconception and that the Fed doesn’t really have control over growth in the money supply.

Mind you there is no disagreement that the Fed controls the monetary base, though it is important to distinguish the difference between the “monetary base” and the “money supply.”

The monetary base increases when the Fed buys government securities (like in the various QE programs) increasing the nation’s debt by letting government indiscriminately borrow for programs we cannot afford. This process creates currency units in the form of bank reserves that have the potential to be loaned out. However, this does not translate into an increase in the money supply until these new bank reserves are actually loaned out. And here is a major confusion embedded in people’s thinking: stimulating economic growth requires financial injections on the work floor (Main Street), but that is not happening, except for some very limited bubble niche markets.

So the next debate is centered around whether or not the Fed controls the money supply. One side claims that the Fed does not control the money supply, but rather banks and their customers control it since their actions are the ones that determine whether the new bank reserves created by the Fed get loaned out and added to the money supply.

The other side however argues that the Fed does indeed control the money supply by paying higher interest on the currency unit reserves that commercial banks keep on deposit with the Fed. Remember, it is these reserves that are created when the Fed buys government securities, but which don’t become part of the money supply until they are loaned out by the banks. By paying the banks a relatively high interest rate on these reserves, higher than what they can get from us, the case can be made that the Fed is in fact controlling the money supply through incentives to the banks to keep this cash on reserve and not loan it out – because if loaned out, it would cause an increase in the money supply, thus inflation and the likes.

What’s important to remember here is that we’re talking currency units, just like bitcoins. The US dollar currency unit is only as good as our Government’s promise to back it. It has no gold reserves or anything of value or than a promise backing it. Whose promise however is not quite clear, as your dollar notes clearly state on the top FEDERAL RESERVE NOTE, and the Federal Reserve is NOT an electable government function. The Federal Reserve is not a US Government institution but a private banking initiative.

Something very interesting happened two weeks ago. Japan, the world’s third largest economy, sold off more than 7% off its market in one day, a fact that had virtually no impact on the US markets. In 2008, during the crash and afterward, it seemed that all of the world’s economies were joined at the hip – the slightest disturbance in even a peripheral country such as Greece or Iceland would send markets around the world reeling.

Analysts were delighted by this as it seemed that the US markets were more defined that day by the Federal Open Market Committee comments than by Japan’s drop. Wrong way to look at it in my opinion, it’s not that events in Japan don’t matter anymore in the US market, it’s more that the rest of the world including Japan are in the process to become much less dependent on the US currency.

Traditional investors still think that the USD is the ultimate safe haven, but a rapidly growing number of contrarians are moving cash and assets into diversified international markets and currencies, which is one of the reasons Bitcoin all at once became an investment option, rather than just a digital currency exchange. Another reason was probably that many Liberty Reserve users saw the writing on the wall and moved into Bitcoin, suddenly making it a household word to at least financial insiders.

In its simplest explanation it is electronically exchanged money – an e-cryptocurrency, backed, like the US dollar, the Euro, the Yen, by an authority’s promise to uphold the value. Many E-currencies have been developed, tested and most often discarded since the Internet changed the financial playing field. Some of the more prominent ones are Webmoney, Moneybooker , SolidTrustPay, Okpay, Cosmic Pay, Egopay, Instaforex funds , C-gold and of course Bitcoin. The problem governments have with Cryptocurrencies is that they are generally designed to have no inflation (once all the currency has been produced), in order to keep scarcity and hence value. Cryptocurrencies are also designed to ensure that funds can neither be frozen nor seized. Existing cryptocurrencies are all pseudonymous, and Bitcoin additions such as Zerocoin which employs cryptographic accumulators and digital commitments to eliminate trackable linkage in the Bitcoin blockchain, which makes Bitcoin anonymous and untraceable.

And yes Mark Dennis is his article points at the fact that Bitcoin works in favor of money launderers and criminals as a negative side effect. But to be honest, the biggest criminals in history usually had and have their own banks and transfer systems.

Having said that, as a true libertarian who endorses the “keep government out of our lives” mantra, I am fairly certain that the next phase of government control will see government do everything in its power now to crush Bitcoin as part of deterring the average person from wanting anything to do with Bitcoin, or, for that matter, any other non-sanctioned e-currency. The snag here of course is that Bitcoin, contrary to Liberty Reserve is a massively distributed system with no obvious individuals readily available for perp-walking. This fight will probably rally around scaring away heretofore vocal and visible champions of a new e-currency, who helped Bitcoin gaining rapid market share.

So while cyberspace is continually developing new and improved currency structures, the scenario on the ground is that the government is preparing to wage war on Bitcoin for some of the right and all the wrong reasons.

For now this war will scare off merchants who accept Bitcoin, or who were contemplating it. And while individuals may be able to fly below the radar, merchants who need to advertise their willingness to deal in bitcoins offer up a fixed target.

It has been the experience in all my years and travels that any government – not just the American government – will simply do whatever it thinks it needs to do to keep the status quo intact, with no moral or ethical considerations.

For now fate for e-currencies, especially Cryptocurrencies, is pretty much defined by how much time it will take technology and the internet to break the status quo dictated by the past, and the inevitability of new paradigms to be implemented. I give it no more than 5 years.

But for more perspective I’m closing with the words of a good friend: “While it’s hard to tell how Bitcoin will ultimately fare… I think the right questions we as possible consumers of the e-currency have to ask is, (a) whether its value is intrinsically linked to its ability to operate in the open, and (b) whether it can withstand a full-on government assault.
And never for a minute lose sight of the fact that the government defines the rules. If your permanent government file might be amended to flag you as a possible anti-government revolutionary solely for visiting a Bitcoin-related website, would you take the risk?
Though I certainly appreciate the effort to launch an alternative, anonymous currency – I see Bitcoin as Prototype 1 in that regard and very much susceptible to being mugged by the monetary mafia (Federal Reserve) that came into power exactly 100 years ago,
Maybe I would buy some for entertainment purposes, but for anything resembling real value, I’ll take things more tangible”.