The Egyptian revolution has put the military in power and tourism is ready to start the engines up again, if necessary at bargain prices. 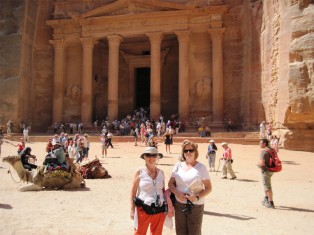 Yesterday I received an article about Egypt returning to normal from Travel Agency co-owner Ange Wallace for upload to the website the-travel-agents.com. When reading the report I couldn’t help but think about one of Chinese inventor Lin Yuang’s quotes on Hope. “Hope”, he said, “is like a road in the country side; there was never a real road, but when many people walk on it, the road comes into existence.”

Even though I think that for the travel industry, Egypt is a pretty safe bet – actually tourism was never a target during the “corruption revolution”. Egypt is a country with very few natural resources and without tourism, poverty would be the main dish on the menu.
Egyptians know this and the military, who is now in charge at least for the next six months, knows it too.

By sheer necessity it is therefore a good thing when numerous agencies and individuals report that Egypt is back in business. Hence the new road to the new Egypt comes into existence.

Egypt needs tourism income desperately, in spite of new Prime Minister Ahmed Shafiq’s address to the world that Egypt’s Economy is solid. Shafiq who is clearly not schooled in economics, may very well speak the truth that the new government is now focusing on efforts to resume normal life and restore security and stability, which will be the mainstay for a quick return of tourism.

Reality is that Egypt is one of the most undynamic economies in the world. The Nile River Delta is not navigable at all, and it is crisscrossed by omnipresent irrigation canals in order to make the desert bloom. This imposes massive infrastructure costs upon Egyptian society at the same time as it robs it of the ability to float goods cheaply from place to place. This mix of high capital demands and low capital generation has made Egypt one of the poorest places in the world in per capita terms. Its Gross Domestic product hovers just over $2,100 US dollars per capita, less than half of its middle class Islamic neighbors Algeria, Tunisia and Iran, only beaten out by the Middle Age nomad culture of Yemen at $1,200 per capita.

Egypt lacks a meaningful industrial base and is a major importer of consumer goods, machinery, vehicles, wood products (there are no trees in the desert) and foodstuffs (Egypt imports roughly half of its grain needs). Egypt’s only exports are a moderate amount of natural gas and fertilizer, a bit of oil, cotton products and some basic metals.
The bottom line is that even in the best of times Egypt faces severe financial constraints — its budget deficit is normally in the range of 7 to 9 percent of gross domestic product (GDP) — and with the recent political instability, these financial pressures are rising.

The protests have presented Egypt with a cash-crunch problem. At $13 billion in annual revenues, tourism is the country’s most important income stream. The recent protests shut down tourism completely — at the height of the tourist season, no less. The Egyptian government estimates the losses to date at about $1.5 billion. Military rule, tentatively expected to last for the next six months, is going to crimp tourism income for the foreseeable future. Simultaneously, the government wants to put together a stimulus package to get things moving again. Details are almost nonexistent at present, but a good rule of thumb for stimulus is that it must be at least 1 percent of GDP — a bill of about $2 billion. So assuming that everything goes back to normal immediately — which is unlikely — the government would have to come up with $3.5 billion from somewhere. And most likely that is not going to be from the US – foremost because we don’t have it to give and secondly because the overriding fear is that the Generals are taking the Egyptian Banks back for themselves, which they used to finance the needed weaponry until 4 years ago.

Even though reports may indicate that it is business as usual in the country, the banks are still closed five days after the protests have ended. Because of its fiscal system, Egypt cannot simply tap international debt markets like a normal country, so while its foreign debt load is small, its total debt levels are very similar to states that have faced default and/or bailout problems in the past (Argentina comes to mind). An 8-percent-of-GDP budget deficit and a 72-percent-of-GDP government debt load are teetering on the edge of what is sustainable.

In short, a trip to Egypt may be in the works as a result of special prices and bargain offers, because the country can only hope that tourism will help it overcome a $16 billion dollar deficit hurdle this year alone. Sound advice would be to book via a well connected and established organization such as The Travel Agency and heed their advice to take out an insurance just in case.