Facebook is a phenomenon that grew into 500 million users in 5 years. It's core function "exchanging information" appears to become a one trick pony, albeit a strong and fast pony. 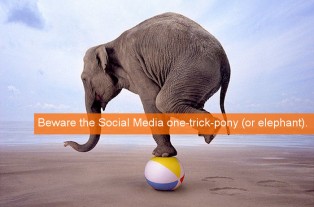 It is the third largest nation in the world behind China and India. 528 million followers and no end in sight. It is the Facebook nation. Of course there are those that say Facebook will not survive the next decade. And on a particularly dreary day I may agree. But I have very few days like that.

On any regular day I realize that in terms of emotion, Facebook is rapidly becoming too big to fail. The investment of time and emotion people make in their Facebook presence will ultimately be so enormous that few would want to spin off to other Social Sites as long as Facebook progresses within the unfolding needs of its members.  With a possible IPO in a few years, I balance my thoughts between “Opportunity of a lifetime” or “another good but not exceptional company.”
Currently I’m somewhere in between the two, and hopefully by the time the IPO comes out, my mind will be made up.

Why the hesitation? Several hundred million people around the world are absolutely addicted to the social networking website, which makes it seems like a no-brainer. User growth continues to expand as do the improvements and expansions. But there’s more to it. While Facebook is one of the hottest sites of the decade, the long-term corporate strategy has less clarity. And to be honest, what should we expect when the 3 founders are just reaching their mid twenties? Not a lot of experience in traditional business warfare. And exactly that fact may play a double edged sword.

Even though society and the economy are experiencing major changes, we are still largely operating on traditional (dependable) business fundamentals, and economists are still trying to predict economic developments from past experiences in depression and recession times. Nobody really has a clear understanding yet of a future driven by rapid fire technological advancements. A bit like the first factories of the industrial revolution outputting goods that required logistics and infrastructures to be distributed.
Traditional wisdom explains that to value a company properly, one must know current cash flows and have a good idea of future cash flows. In the case of Facebook, there’s a wide range of possibilities with future cash flows. As the slow decline of social networking website MySpace has shown, the public can be fickle. Could a similar fate befall Facebook or was it the Facebook formula that caused MySpace’s slow demise. Ask the younger generation just out of school and you hear that MySpace has a tremendous spam issue and privacy concerns for a generation beyond teenage. MySpace is now seen as a middle school – high school medium with an emphasis on music and bands, focused on Me, look at me, rather than Facebook’s approach that says…“let’s stay in touch and network”.

Having said that, a potential problem for Facebook that may grow bigger is the privacy issue. A couple of days ago the Wall Street Journal revealed a security hole in Facebook linked to independent application programs. Since the story broke, many of the accused applications were shut down by Facebook, which either implies that the company previously knew about the leak potential and did nothing, or the Facebook team is less technologically competent than previously assumed. Whichever one it is, this emphasizes to a degree the company’s privacy culture in which Facebook has been generally nonchalant about security breaches and privacy concerns. That comes as no surprise as the CEO, Mark Zuckerberg, has personally made statements showing little respect for privacy. Further, a few company PR statements on privacy matters have even been outright condescending toward concerned users. On the other hand I realize, that 25 year old Zuckerberg may know something I haven’t quite grasped yet…the fact that the younger generations don’t consider ultimate privacy that big of a concern. In several conversations I have learned that they feel that the shear mass of numbers of users, multiplied by the enormous amount of information profiled, turns potential abuse into the “luck of the statistical draw”. It’s a lot like security guards in stores and a guard dog in a home; they don’t stop burglaries, they just make the burglar go somewhere else, to the least protected spot.

While Facebook’s user base keeps growing, this concern could come back to haunt the company as the primary users grow older and more concerned about the issue. There is no denying that cyber crime is becoming a serious threat. Just ask people who have been using Craigslist for 4 or 5 years.
Investing in cyber security is an absolute must, even if it only means sending the criminals down the street. Currently, much of the population lives in an “ignorance is bliss” world. They have no idea about the vulnerabilities of their identities, bank accounts, and personal information. Facebook has been profiting from this blissful ignorance. If you have a social networking account, check how many banking security questions you can find on your friends’ pages. Birthdays, favorite hobbies, hometowns, pet names, favorite movies, singers, email address, etc. Social networking websites are a motivated identity thief’s dream. Eventually, the rest of the world will catch on to the danger. Just as you cannot leave your doors unlocked anymore in most places, soon no one will reveal as much info online as they do now. And that’s going to hurt social networking sites badly, unless they change security breach issues with the flow.

Another problem may become the question of how many features and additions can the site possibly handle and there may come a point where the nature of the site changes and growth cannibalizes itself. With Grandma and Mom starting to join Facebook, the appeal may slowly die down. Judging from my own family I don’t think so, as mom and kids constantly exchange updates and messages, while divorced parents keep themselves updated with the lives of their kids and vice versa through their Facebook pages.

So here’s the dilemma. On the one hand, the product is amazingly appealing to consumers. They can’t get enough. In fact, Facebook literally spreads itself. On the other hand,  a very young and inexperienced management has some long-term strategy issues to address. Growth appears to be driven by the core product – not the recent additions and features. What can the company do to maintain this momentum? Online communities often seem invincible in their peaks, but with poor planning they can suddenly collapse. We should not forget Prodigy or AOL when it was so powerful it could purchase Warner Communications. We also saw innumerable online games here today, gone tomorrow.

For now Facebook appears to be riding the wave of its original idea with only incremental improvements. Though the company is doing well, it still might be a one-trick pony, albeit a very strong and fast pony. If the company can find a credible long-term strategy to keep users engaged and privacy secured, I would have no hesitations about investing in it. Yet at this point the focus is still on idealistic phrases and relatively minor site improvements.
On seminars I always explain the major social media as Twitter being a cocktail reception, Facebook being a reunion and LinkedIn being a tradeshow. That way people usually get a better understanding of the functions. All internet companies, Facebook not excluded face real challenges that must be addressed before the future starts unveiling the direction of technology.