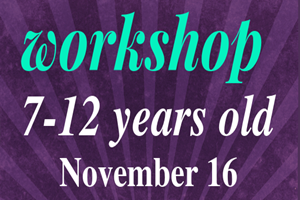 Press release: Blue Fire Theatre will present a Theatre Essentials Workshop Ages 7-12. Limited space is available as only 10 students will be permitted per class. So, early registration is recommended.

The workshop will begin with a few warm-up activities, then move on to some basic stage mechanics and rules for improv and then each student will take his or her turn getting “on stage” to do some improv games/scenes.

The workshop will be taught by Katie Johnston, who was recently seen on stage as Maggie in Blue Fire Theatre’s inaugural show, Cat on a Hot Tin Roof.

Katie is an actress and comedian who has performed professionally in film, television and regional theatre throughout Florida and in Los Angeles. She has starred in productions at the Geffen Playhouse, The Odyssey Theatre and The Norris Theatre, to name a few. She earned her BA in Theatre Arts from Jacksonville University. Her extensive experience in improv comedy includes training at the Groundlings School.

Katie was a featured stand-up comedian at the Portland Maine Comedy Festival and the New South Comedy Festival in 2018. She also had the extreme pleasure of opening for the Lady Parts Justice League show starring Liz Winstead (co-creator of The Daily Show.) Recent theatre credits include, Alicia in Small Mouth Sounds (The 5 & Dime,) Sylvia in Sylvia (Players by the Sea) for which she received a Pelican Award for “Best Actress in a Lead Role.”

Offstage, Katie has been working with children of all ages in a variety of different settings for over 12 years. Currently she is the director of children’s programming at Big Fish Power Yoga, and runs the kids acting classes at Creative Veins Performing Arts Studio located in downtown Jacksonville.

Blue Fire theatre was created in July 2018 to expand the love of theatre in Nassau County and the surrounding area. Theatre is a shared experience and we felt strongly that the time had come to share this art form beyond the island to a more expansive part of the county. We passionately believe theatre plays an essential role in not only entertainment, but developing conversation, strengthening emotional thinking, and connecting with our community. We feel that by producing theatre experiences that tell powerful, uplifting, funny and heartwarming stories, we are a part of something bigger than ourselves. Which is to bring human beings together in a collective moment that reminds us we are, at the core just that, human beings.

“I regard the theatre as the greatest of all art forms, the most immediate way in which a human being can share with another the sense of what it is to be a human being.” Oscar Wilde

Blue Fire Theatre extends an invitation to everyone in our community to harness the transformative power of theatre to explore the here and now – and together, broaden our world’s and more importantly our community’s compassion, understanding and hope.

Mission Statement:
Blue Fire Theatre creates life out – loud theatrical experiences that ignite the imagination. We connect with our community through stories that make us think, feel, laugh, love and become inspired. Blue Fire Theatre celebrates the dynamic power of the theatre to illuminate our shared humanity.