There is a flipside to the coin called Employment Outsourcing

For as much noise as the Obama camp makes about Romney's outsourcing history, foreign companies opening plants here show the other side of the issue. 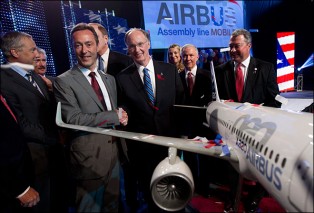 There is much more to outsourcing than meets the eye

With political rethoric reaching crescendos, especially in the Obama Campaign, accusing Romney to be a leader in Employment outsourcing to the extent that it almost equals national treason, it seems like a good idea to point out that outsourcing is an economic move, not treason or even unpatriotic.

Here is for example the announcement from Airbus that it will establish a manufacturing facility in the United States to assemble and deliver A320 Family aircraft. A move that creates some 1,000 jobs at the Brookley Aeroplex in Mobile, Alabama.

It will be the company’s first U.S.-based production facility. Airbus stressed that the assembly line, which will create jobs and strengthen the aerospace industry, is part of its strategy to enhance Airbus” global competitiveness by meeting the growing needs of its customers in the United States and elsewhere.

The facility in Alabama will assemble the industry-leading family of A319, A320 and A321 aircraft. The company said construction of the assembly line will begin in summer 2013. Aircraft assembly is planned to start in 2015, with first deliveries from the Mobile facility beginning in 2016. Airbus anticipates the facility will produce between 40 and 50 aircraft per year by 2018.

The motivation for Airbus to expand in America,” said Fabrice Brégier, Airbus President & CEO lies in the fact that the U.S. is the largest single-aisle aircraft market in the world – with a projected need for 4,600 aircraft over the next 20 years – and this assembly line brings us closer to our customers.
Alabama Governor Robert Bentley said: “We owe thanks to so many people who helped make this effort a success. This project will create 1,000 stable, well-paying jobs that the people of this area need and deserve.
Airbus is the largest export customer for the U.S. aerospace industry.  Since 1990, the company has spent $127 billion with U.S. suppliers – $12 billion last year alone.

As I pointed out this is a financial-economic move, yet politicians in France  will use it in the same way as their US counterparts and cry foul for outsourcing of French jobs to Mobile Alabama. If we add up all the foreign companies with offices and production facilities here in Florida alone, we should remember that wherever these companies are headquartered across the globe, these countries “lost” some 300,000 jobs because management thought it financially more attractive to move some production overseas. Even though it may be hard to swallow for diehard patriots here, we should remember that Anheiser Busch is now owned by a Belgian brewery and Chrysler Motors is really FIAT.

The Impact of the Travel Industry

There a two main reasons why employment growth in the travel sector has been outpacing the rest of the economy in recent years:

Yes, the travel industry is also experiencing a slow down, because of economic problems in Europe. Still the travel industry is more internationally engaged than most sectors of the economy, which is why it is important for US policymakers to enact sensible long-term reforms that will make it easier for travelers from other areas of the world, such as Latin American and Asia, to visit the United States.  It takes the spending of roughly 33 overseas visitors to support one US job. As an island tourism destination Amelia Island needs to take heed in these numbers.

I had the relative pleasure this morning to hear all the GOP candidates for the upcoming August 14 elections to give their “spiel” in Central Park in Fernandina Beach. As a matter of fact, we video taped it. I heard the word experience out of everyone candidate’s mouth as the most important contribution to their plea of being elected. No one that I heard mentioned creativity in finding solutions to the socio economic problems of our times. Almost everyone was proud of their 25 or 30 years of being part of the respective boys and girls clubs of past standing. Candidate Weinstein thought it was important to mention how much money he was throwing into a campaign that at best would bring him a $28K job per year. Some candidates were touting the always popular election promise to bring manufacturing jobs to the county, and I think back to an impressive presentation a couple of days ago, given by AC MacDonald, general manager at the local Rayonier plant for the European American Business Club. The company has a major impact on Nassau county’s economy, yet has only 275 or so people employed – because that’s all it takes for them to be successful at this stage of the game.

All in all I did not hear any candidate talk about tourism; about developing travel marketing plans, infra-structures, long term employment and educational opportunities, in spite of the fact that both the Ritz Carlton Amelia Island and the Omni Amelia Island Plantation have enough confidence in our tourism future to invest a combined quarter of a billion dollars in their properties.

And that lack of vision  is discouraging, when our tourism potential is so much greater than any other business sector in the county, that is either already over-presented in the Greater Jacksonville Area, or is simply geographically at a disadvantage.
It is not good enough to call for change. We already fell for that misnomer 4 years ago in Washington DC. There is place for some new thinking far beyond the “good ole’ boys clubs. Every economy is local and it is time to pass on the torches and start presenting creative long term solutions, answers and directions for our future.