Things Have Changed (a lot) Since We Were Young

a toddler in the 1950s, history, lifestyle

Chicken was not a fast food when we grew up. Come to think of it, we ate a lot less chicken in those days than we do today. 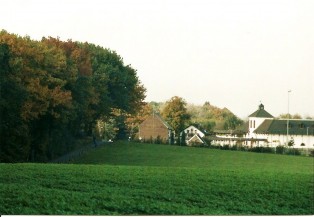 About half a mile from where I grew up

Things have changed since we were young a guest at the Inn remarked recently. It came kind of as the conclusion to a conversation about fast food and home deliveries of food. Working on our AmeliaBites.com restaurant review website I had noticed how many restaurants these days offer take out and delivery, so when that guest’s teenage child asked me, “What was your favorite fast food when you were growing up?”, I must have looked a bit dumbfounded. After a couple of seconds I said: “We didn’t have fast food when I was growing up. All the food was slow.”

“C’mon, seriously. Where did you eat?”

“It was a place called home,” I explained. “Mom cooked every day and when Dad got home from work, we sat down together at the dining room table, and if I didn’t like what was put on my plate, I was allowed to sit there until I did like it. And that could be the next morning or lunch time.”  By this time, the kid was laughing so hard I was afraid he was going to suffer serious internal damage, so I didn’t tell him the part about how I had to have permission to leave the table. And no there was no TV blaring during dinner. Typical table conversations ranged from stories we heard in the village to vacation plans, to politics, religion, school and sports. Here are some other things I would have told him about my childhood if I hadn’t been afraid that his system could not handle it:

• My parents never drove me to school (or even Kindergarten!). The walk to school must have been a little over a mile and was through the neighborhoods. I walked there after breakfast for 9-12 noon classes, walked back home at lunch time, and walked back to school for 2-4pm classes and played my way back home after classes were over at 4pm. Sometime the 4th year of Grade school I got a hand-me-down bicycle that had one speed: slow.  I was the third son in a family of 5 sons plus parents, so hand-me-downs were pretty much a natural. If it was too cold or snowy, I walked.
• We didn’t have a television in our house until I turned 9. It was black and white, reception was accomplished with rabbit ears, and later an antenna on the roof, and the station went off the air at 11pm, after playing the national anthem and a religious message(?). It came back on the air at about 9 a.m. the next day and there was usually news to begin the day followed by women’s exercise and domestic care programs. On some days there was not enough programming available on Dutch TV but we were lucky to catch the airwaves from Germany (all of 2 stations) and Belgium (two as well, one for Flanders, the dutch side and one for Wallonia, the french side) and good old Radio Luxembourg. No wonder speaking Dutch, German and French at an early age came naturally to us.
• I remember listening to the World Cup soccer on the radio and the highlights of the year were the rivalry match between Holland and Belgium and the daily results of the Tour de France.   Oh and I never had a telephone in my room. The only phone connection in the house was on a party line. Before you could dial, you had to listen to make sure other people weren’t already using the line. But I still remember the phone number 805 which later became 5805!
• Pizzas were not known to us, unless on our summer vacation trips to Italy, and certainly not delivered to our home… but milk and eggs were and our baker bicycle delivered personally our favorite breads and cookies on Tuesday’s and Saturday’s. His customer route encompassed about 30 miles. His name was Bakker Mueller. Of course we had another bakery 200 yards down the road, but Bakker Mueller was special. Harrie Pasmans was our dairy farmer who brought fresh milk and eggs every morning, horse and wagon and all. My older brother Eef loved to jump on his wagon and help deliver in the weekends. Harrie Pasmans lived about 300 yards to the right of us. About three hundred yards to the left was Farmer Roumans, whose horse and wagon delivered fresh fruits and vegetables and potatoes before noon every day. I fondly remember the days that white asparagus freshly out of the ground and the circumference of a thick hot dog, were the culinary highlight on the dinner plate at home: topped with a special softly spiced real butter sauce reduction and slices of hard boiled eggs and small cubes of delicious cooked ham. I felt closer to Culinary Heaven in those days then ever since.
• The butcher shop was 300 yards to the west and offered a delightful selection of meats I’ve never even seen this side of the Atlantic (no not even at Trader Joe’s). Chicken were not sold in stores then. That came later. If you wanted fresh chicken, you went into the coop and selected one for consumption. And I personally can attest to the truth behind the expression “running around like a chicken without a head.” Come to think of it, we ate a lot less chicken in those days than we do today.
• 500 Yards to the East, almost directly on the border with Germany, stood my grandparent’s home, just a short walk through grain fields. If she had wanted to, mom could have watched us walk to our grandparents from the upstairs bedroom. She probably never did, because raising five sons takes a lot of energy and leaves little time I imagine. Mom had a little trick to make sure however that she got some private time with dad. As toddlers we often got half a glass of red wine with dinner. We were asleep by 8, often by our own choice. But Mom never had to worry about us being safe. Everyone in the neighborhood knew each other well and looked after each other. I still remember the names; the Theunissen family, the Donkers family, the Keulen family, the VanderMeulen family (mom’s sister); it was a square mile of pure, fresh, tasty, playful, safe and innocent heaven on earth. Yes things have changed quite dramatically since I was a teenager half a century ago, but at least I can truthfully refer to something called “The Good Old Days!”