Our choice of food has little to do with trying to fit into a Culture, but everything with what quality we can get for a decent price and at what time of the day. 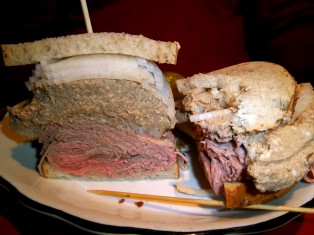 Most of my steady readers know by now that I love to dissect surveys and research reports as they too often confirm what they were set out to proof in the first place and are most often sponsored by stakeholders/beneficiaries of the outcome. A couple of weeks ago I read the result of a study that concluded that “Immigrants and their children may choose to eat American food as a way to fit in”, adding that this may help explain why immigrants are catching up to America’s obesity levels in less than 15 years.

I thought it was less than professional how the study was introduced to immigrants by casting doubt on some subjects’ Americanness, asking if they spoke English or saying they had to be American to participate. Psychologically this provokes what psychologists call stereotype threat, the fear you’ll confirm negative stereotypes about your group or nationality. Although white immigrant participants weren’t as much affected by these questions, Asian-American participants were more inclined to list quintessentially American foods — burgers, BLTs, mac and cheese — as their favorites, when the researchers called their status as American into question. They were also more likely to order and eat those dishes, consuming an average of 182 more calories than their non-threatened counterparts. And that apparently was the motive for the study.

Just based on the demographics (school kids) they chose for the study, it seems that this particular group is still very susceptible to peer pressure. In my personal experience having a lot of Asian-American(?), European-American(?), African-American(?) and purely Asian acquaintances and friends in every place in the world, I have to say that when an individual no longer has the pressure to “fit” in a specific environment, and their cultural differences are just accepted by their peers, they tend to choose whatever is available AND they like. Sometimes that’s Asian, Middle Eastern, Chuggi, European and sometimes American.

If you want proof of that belief then take a trip to New York where you can find food turned into a melting pot of tastes and flavors, as well as the authentic cuisines from around the globe, more than in any other city in the world.

I’m coming to the end of a fifteen day trip that took me to a great variety of eating establishments in the Adirondacks, Saratoga, New York City, Washington DC, Richmond VA, a magnificent Southern BBQ hole in the wall in South Carolina and last but not least, Charleston and once again discovered that truly the choice of food has little or nothing to do with my trying to fit in an American Culture, but has everything to do with what I can get for a decent price at a decent quality and at what time of the day. Honestly I don’t think it’s even a national thing. Ask any Californian who’d visited what Mexican food is like in Minnesota (not unlike eating a photograph of a burrito: it looks like one but tastes like cardboard). Ask any Pennsylvanian what a cheesesteak is like in California (for the love of God, why would you put avocado and lettuce in it?). If you are an Asian in the Midwest, your choices are bad Asian food, very bad Asian food, or burgers and pizza. If you are a central European in the Midwest, your choices are driving 250 miles to Chicago, or bad Asian food. Or burgers. I think the people will also assimilate to the good local foods rather than endure the terrible bastardizations of what they love back home. Nothing to do with fitting in, everything to do with availability.

Most of my friends shudder when I mention liver as one of my favorite foods, if prepared well. My favorite sandwich at the world famous Stage Deli in New York is the “Roger Maris” loaded with rare roastbeef, fried bacon and liver mousse. Not many Americans order this or eat goose-, duck- or liver paté. To me it’s a delicacy, as is a bagel loaded with nova scotia salmon and cream cheese with onions and capers. It’s a Jewish tradition born in New York. My favorite Italian dish is Oso Bucco, and have a burger at least once a week, as I go for Chinese once a week too.

From my trip and especially the New York City part of the vacation, I can positively reaffirm that the cultural divide is not one of nationalities, but is much more split along two different axes: Omnivore versus Vegetarian and Drinkers versus Non-Drinkers.

Seriously however, if the point of the TFA was to promote more fear about eating crappy food, they should just keep the findings of a flawed study like this to themselves. Reading the study’s conclusions made me hungry for crappy food. Forget mac & cheese… pass me the poutine.