My neighbor stopped me in the middle of Fletcher with the question how we managed to get Ana Popovic to come to the Amelia Island Blues Fest, while her voice blasted out of his car window. This Saturday, be there. 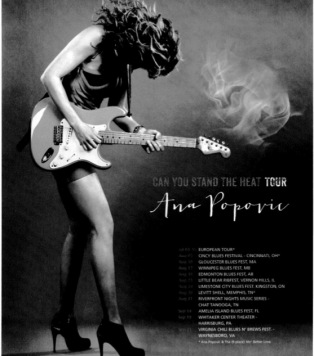 The 3rd Annual Amelia Island Blues Festival (AIBF) is only two days away and promises to deliver another powerful line-up of top tier talent for local fans of the blues.  Back by popular demand, our Master of Ceremonies will be Roger “Hurricane” Wilson from Kennesaw near Atlanta, will also be performing on Friday, September 13th with our very own Blues in Schools Band, under the direction of local band leader Johnny Robinson.

The event kicks off at 6:00 PM on Friday night at Centre Street near the Palace Saloon, and is highlighted by the return of noted bluesman Albert Castiglia in a “Sounds on Centre” free admission format.  Castiglia was riding the high of his No. 1 CD at this time last year and he appears to be gaining in popularity worldwide. Even though the Friday event is FREE, the organizers request that you bring some food items (canned or boxed) for the Barnabas Foodbank. Their truck will be parked next to the stage near the Palace Saloon. “It has been a pleasure to work with Barnabas as one of our benefactors this year and the committee  looks forward to a long term partnership with this worthy cause,” says Festival President, Jeff Malone. Music will be played from 6:00pm – 8:00pm. Roger “Hurricane” Wilson and the “Blues In School Band” will open the evening, followed by Albert Castigilia. Afterwards, Albert and his band will also host a After Festival Jam starting at 10:30 at the Palace Saloon, one of the festival’s major sponsors.

Stepping away from Main Beach, this year the organizers have chosen for the more intimate location on the downtown river front, where the boat trailer parking meets the Pétanque Courts; Very much in line with this year’s artist line up. The buzz surrounding the Saturday line-up has focused on some legendary names, as B.B. King’s youngest daughter Claudette opening the event.  The event closer is Mud Morganfield, the oldest son of blues icon Muddy Waters. If the wind kicks up folks might actually think they are in Chicago!

Blues enthusiasts certainly don’t want to miss these two outstanding performers and will be grateful that both had the talent and decided to carry on the family business of traditional blues.  Also a part of the strong musical line-up, Zac Harmon and Ana Popovic are both proven crowd pleasers.
Possibly the biggest surprise of the year may well be the sensational John Németh, who has been exciting crowds around the world with his strong voice and intense harmonica work. John Németh is a rising blues star; a singer steeped in the tradition and reminiscent of the greats. His decade long career has found him opening for Robert Cray, Keb Mo’, and Earl Thomas. Performing major music festivals around the United States, Europe, Canada and Asia has brought him critical acclaim.  He is currently up for five major blues awards and he has been one of the most sought after blues performers at festivals all across the country.  He is cradled right in the middle of the line-up to climb the stage at 2:15 PM.  You definitely want to get set up in time to see this terrific performer.

“I remember telling friends up North in ’80 that they should go see Stevie Ray Vaughan, but they weren’t impressed because he wasn’t famous yet. It will give me great pleasure to say, ‘I told you so!’ about John Németh. You’ll see.” Bob Margolin, Blues Revue Magazine
“Either John Németh is one of the greatest vocalists in the world or this was the best performance of his life, or both.”  Bob Horn, Washington Blues Society
“Hands down the toughest young harp player I’ve ever heard.” R.J. Mischo
“Boy! John Németh can really belt it out!” Charlie Musslewhite
“John Németh’s voice is a national treasure.” Junior Watson

The Amelia Island Blues Festival has brought a tremendous amount of talent to the island during its short history, to include Shemekia Copeland, Albert Castiglia, Sean Chambers, Shane Dwight, J.P. Soars, the Nouveaux Honkies, Flannel Church, and Beth McKee.  The list just got longer and the festival just moved up a notch in musical credibility.

Tickets are on sale now by visiting the festival website at www.ameliaislandbluesfest.com and clicking on TicketBud until Friday at midnight.  The Friday night performances are free, while the Saturday event at the waterfront is $20 in advance and $25 at the door.   VIP tickets are available for $50.

The gates open at 11am and the festival closes at 8pm, followed by a After Festival Blues Jam at Sheffield’s starting at 10:30pm , with Roger Hurricane Wilson and the Shuffle Junkies as hosts, while all the artists have been asked to join in.