Carl Hiaasen wrote hilarious books with an undertone that begged for Florida preservation. Is Amendment 4 really going to do that? 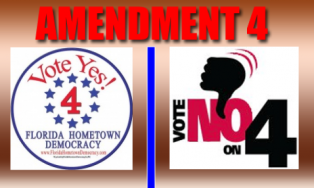 What's it's gonna be baby: Yes or No?

Up front, I would like to claim that I am a newbie (4 years) to the Florida community and thread cautiously where it comes to local, regional or statewide politics, emotions and traditions. No matter the fact that I spend countless hours studying and researching the various pros and cons of any proposition or legal amendment, I can not claim to be able to have the time to study everything that comes along in politics, enough to make me understand the processes that created the results.

I have however seen too many sneaky ways politicians make sure they get their pet projects loaded up into quintessential legislation without people ever really knowing the details of why they all at once pay more taxes or lost grandfather rights or now have to take their kids another 15 minutes farther to school. As far as I am concerned, politics is dirty and entirely self serving these days.

I am currently trying to figure out why FEMA put the floodzones “higher-up-the-hill”, resulting in different (mostly higher) premiums for people as of coming January 1st, not even talking about consequences for elevated construction needs.
This survey I owe you hopefully sometime next week, but here is already a heads-up.

So returning to Amendment 4, I see South Fletcher garden signs that ferociously state VOTE NO to 4. Frankly on most parts of the island the NO signs dominate; but then there is N. Fletcher and all at once on a bike ride I see several Vote YES signs with that dangerously seductive word combination “HOMETOWN DEMOCRACY”, that sends shivers down my spine!

From the very superficial information that I have gathered I suspect that Amendment 4 means more red tape at first and concentrated power positions as the process goes on. The first part is a natural, as the more people you need to consult with, the longer it takes to make decisions. The second part is a natural as well. The longer things take, the less the general population stays interested and the more they are delegating the process to the powerful few.

So…now that elections a creeping closer I think it’s time to find out what people actually know and think about this 7 year old initiative.
Via a friend whom I cherish in knowledge, intelligence and wisdom, who makes his living in the confinements of what Amendment 4 is all about, I received an endorsed opinion from another friend who undisputedly has more insight in the matter than I do.

So I am going to make the SearchAmelia platform available for anyone out there who has a solid opinion to share on the matter, starting out with the following email:

Have you done a story on Amendment 4 yet? If not here is a good one that I just cut & pasted from an e-mail – many thanks to Ryan!

Amendment 4 will kill the economy – by: Ryan Schmitt

Amendment 4 started in 2003 as an initiative called Hometown Democracy (Sounds great, huh?  They want you to feel warm and fuzzy).  It took the founders of this group two election cycles to collect enough signatures to get this on the ballot as a constitutional amendment.  (yes, it’s true, if you have enough money to pay people to collect signatures in front of a shopping center, you can get your personal agenda on the ballot as a constitutional amendment and change the lives of Floridians forever).  I have been following and fighting this issue personally since I heard about it in 2004.

Amendment 4, if passed would require voter approval of all changes to local land use plans.  Currently, county and city commissioners make comprehensive plan change revisions.  Amendment 4 would force voters, not our elected representatives, to decide hundreds of minor, technical comprehensive plan changes each general election.  So for each land use change required for a new subdivision, a new school, a hospital, a new road or easement, would take a majority vote by the general public to make it happen.  For example, when the Davis family donated the land for the Mayo Clinic, under Amendment 4 it would have required a vote by the general public and passed.  As you can imagine, Mayo Clinic would not likely have started in Jacksonville if that was the case.  Do you think the Davis family would have donated the land AND paid for an advertising campaign to get the public to vote in favor of approving the land use change?  Not likely.

Whether you agree that our elected officials are doing a good job doing this already is NOT the question here.  If you feel that land use changes are not being done to your satisfaction, you have a right to appeal the current process and if bad enough, politicians can be voted out of office.  Regardless how you feel about the current process, Amendment 4 is NOT the way to fix it. Amendment 4 would cripple our economy, cost jobs and raise taxes.

Proponents of Amendment 4 want to tap into the public’s frustration with politicians.  They want you to say “the people should have a choice”.  My question is, “how can the public properly decipher the technical issues on a land use change as written in 75 words or less on a ballot that could have hundreds of land use changes?”.  Our supervisor of Elections said that in 2009, if all of the land use changes were on the general election ballot, the ballot would be 10 pages long!  What voter would take the time to research the details of 10 pages of land use changes in order to cast an informative vote on each one?  The “people should have a choice” concept is nice, but in REALITY the general public does not have the time or technical knowledge to make those decisions.  HOWEVER, if we are talking about reality here, there would not likely be 10 pages of land use changes if Amendment 4 was enacted.  The reason why is because business are not likely to invest their time and money in a process left up to the vote of a general election.  Here’s where the huge hit to our economy comes.  Business would not invest or expand in our state and our economy would suffer.

No other state in our country has enacted a process like this!  And, in fact, a “mini” version of Amendment 4 was enacted in St. Pete Beach and failed miserably.

I can go on and on about this issue, but you can get a much more professional explanation at www.florida2010.com.