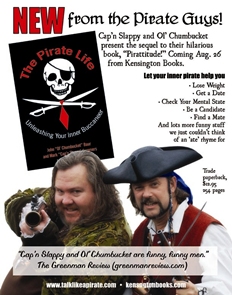 September 19th (every year) is:
International Talk Like A Pirate Day

Arrr! It all started on June 6, 1995, with two regular, ok, irregular guys named John Baur and Mark Summers, they be the pirate guys.

They didn‚Äôt set out to become “the pirate guys.” Truth to tell, it wasn’t their intention to become anything, except perhaps a tad thinner and healthier over a friendly game of racquetball. On this day, for reasons they don‚Äôt even know, they began to encourage each other in pirate slang.

Anyway, whoever let out the first “Arrr!” started something. One thing led to another. “That be a fine cannonade,” one said, to be followed by “Now watch as I fire a broadside straight into your yardarm!” and other such helpful phrases.

By the time their hour on the court was over, they decided then and there, that what the world really needed was a new national holiday, Talk Like A Pirate Day.