Charity Events, In the News

Southern Indiana Tornado Relief Concert was organized in less than one week, featured 40 bands on 4 stages, and raised over $60,000. 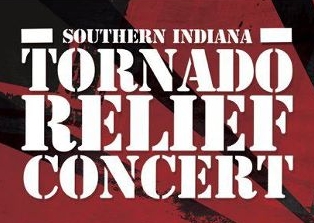 Jesse Vest from The Louisville Crashers has posted a video on their Facebook page announcing the total funds raised during the Southern Indiana Tornado Relief Concert. The benefit was organized in less than one week, featured 40 bands on 4 stages, and raised over $60,000. This is $10,000 more than the original estimations!

Here is the final breakdown of those funds:

-Admission fees, additional door donations and the silent auction brought in $55,611.78. Every penny is going to the Clark County Red Cross in Southern Indiana.
-$4,500 from concessions sales will go to the Salvation Army.
-T-shirts from the benefit concert have completely sold out raising $5,058.50. This money will be donated to the Gilles Family.

Darrell Gilles, his wife and three children took shelter in the closet of their Henryville home when it was thrown about 300 yards when the first tornado struck. See their incredible story HERE. 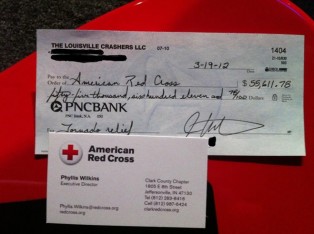 The fundraiser was held at Silver Creek High School in Sellersburg, Indiana just nine days after the storms ripped through Indiana, Kentucky and Ohio.

The Louisville Crashers made it clear from the beginning that this event was about raising money by stating, “Bring Money!!! This is first and foremost a fundraiser, so stop at the ATM on your way and bring everything you can spare! Admission is $10 for adults, and $5 for kids 12 and under.” Even the musicians and bands who volunteered to perform at the event paid the admission fee.