Turning sixty four on Thanksgiving is almost a mandate to revisit one's life's grateful events. My gratitude goes out to my wife, the uplift of the children and grandchildren and my many friends. 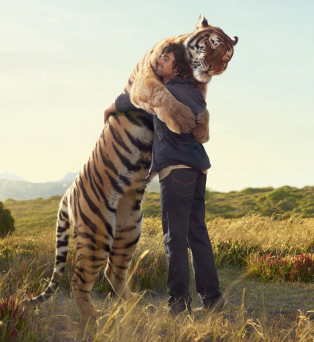 Turning Sixty Four on Thanksgiving Day is in my very personal opinion an invitation to clamor back into the annals of a very busy life and come up with a million reasons to be thankful.

I was born a blue baby and as medical insiders know, that was almost as serious as a death sentence especially in 1950. My 80 cm umbilical cord had wrapped itself 3 times around my neck like a boa constrictor on a Paleo Diet. No wonder that the midwife upon seeing this immediately opened the window to my mother’s room and called in the gardener to serve as the male witness to my emergency baptizing. I’m not sure if there was a divine correlation between that urgent sacrament action, that was supposed to give me protection from evil on my imminent journey to heaven, and the fact that I desperately fought for my life from that moment on. It was a long fight of almost 6 years in and out of hospitals, before I finally seem to get a grip on life. I’m thankful for everyone who saved me on that first day and played a part in that healing process.

At age six it became time to grow stronger, or else my frequently returning bouts with pneumonia and asthma would still get the better of me, so my mom and dad sent me to Sensei Dreu, who taught Judo, Jiu Jitsu, Karaté and Tai Chi. I became a ‘fanatic’ follower of his arts and I am thankful for that as it has guided and saved me on many occasions since. The fact that so many years later I still remember Sensei’s name points at gratitude for his lessons.

I’m grateful for the family I grew up in and the fabric of value that was installed. My family believed in travel, languages, compassion and lack of judgement without knowing the facts. This has helped me greatly to become a better person and understand or at least tolerate many human idiosyncrasies. I’m forever grateful for the many dinner table discussions we had as a family, as they have guided me like a laser beam in the process of understanding myself.

Paul McCartney wrote “When I’m Sixty Four” and the Beatles put it on Sgt. Pepper and we all sang it for a week or two. We never caught the meaning nor the message, it was something to just sing along with until something came along. It was 1966 or so and Kennedy had been murdered and the Cuban Missile crisis was fresh in our memories, Vietnam was an ugly enigma and Berlin had a brick wall through its heart. Turning 64 seemed a galaxy away. I’m grateful I didn’t catch the message either, because it kind of meant that my early teenage years were uncomplicated. The Who sang “Hope I die before I get old” in their hit song My Generation and Elton John sang the eternally beautiful “Sixty Years On” and we were all young and innocently oblivious of the facts and realities.

As a teenager who entered adulthood in the late sixties, music and flower power walked hand in hand as we preached to love each other while storming the barricades of perceived oppression with angry slogans and molotov cocktails. In hindsight it was all a matter of helpless frustration with the manipulations and machinations of power. I’m not particularly fond of the fact that this has not changed since those days, but I’m extremely grateful that I survived the following dozen years, often tarnished with darkness, violence and pain. I am grateful that I was allowed to shake the bad memories and embrace the good ones as they have helped me become a much better person.

I am grateful to the 3 women who courageously tried to stay at my side during those years, probably knowing or at least sensing that one day I would move on in a continued search for my true soul.  And I’m extremely grateful that in my sliding door life of a thousand changes, my true soul came to find me ten years ago, when she traveled to a land she had never even heard of and found me against all, even abnormal, odds. The stars were aligned then and have been guiding us ever since. And to boot, she came with an instant family of great children that now light up our Holidays and our lives.

Yep I’m grateful to be sixty four today, even if that means having outlived my all time favorite four legged Scootertje and my brother and pal Thom. I’m grateful for having had them in my life and I say thanks for the many blessings, family and friends that have come my way over all these years.

When I get older losing my hair, many years from now

Will you still be sending me a valentine, Birthday greetings, bottle of wine?

If I’d been out til quarter to three, Would you lock the door?