Two Recent Incidents That Put Reality Back in Squares

An educated dialog is needed to establish an honest energy picture for the future and the price tag it will require. 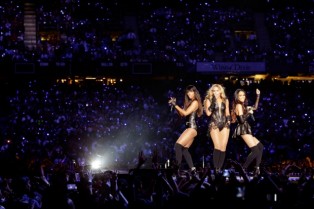 When the lights went off in the Superdome, a light went on in my head

There are moments in life that define clarity of action, but only if we are willing to understand what’s at stake. Lately I have been trying to avoid writing about economic woes, financial fears, loss of liberties to the point where fear of the future creates anxiety. I have consciously tried to just not care anymore, be complacent and pursue happiness along the lines of what I learned years ago from a Tibetan friend who shared with me that happiness is ENERGY. “Happy people are bubbly and enthusiastic”, he said, “while depressed people usually complain about lack of energy.”

So with that in mind, we (my wife and I) energetically started renovating and upgrading one of the suites in our little Bed and Breakfast on the beach. All other 5 suites went already through this process in the past 13 months, but with this particular one, we were a bit scared of what we would find behind layers of wall paper and underneath floors. And our fears were not disappointed. A building erected in 1938 clearly has some plumbing and power issues to anticipate and the layers of paint and wallpaper applied in those 75 years are enough to make structural walls out of basic room dividers.

While attacking the various problems I learned rather quickly that in those 75 years a lot of building materials and products have changed along the lines of new technologies, many of which do not necessarily play nice with the old ones. Needless to say that the 4 day project turned into 10 days and our happy energy took a beating in the process.

And while at it, I heard the story about the lights going out at the Superdome during a Superbowl that attracted 115 million viewers, who ate 1.2 billion chicken wings and drank 50 million cases of beer and I couldn’t help but think, that history will remember this one as a marker of things to come. Sorry Beyoncé, sorry Joe Flacco, sorry GoDaddy commercial, you may all have your minute in the spotlight, but history will recall this one as the one that had an overly complicated power infrastructure fail, in what is supposedly a showcase of modern technology.
That fact, combined with my micro experience at the Inn, put reality back in squares for me.

We live in an era where infra structures are getting more and more complex because of rising demand and financial austerity; so as usual we are trying to save money by connecting old systems with new systems; and that is clearly a recipe for disaster. I couldn’t help recalling astronaut turned politician John Glenn (at least I think it was him) saying something like “scary to realize that all parts of this flying object are manufactured by the lowest bidders,” during his 1962 debut in space.

On a local sidenote it kind of also makes me shiver when I read local commissioner Gass reject the continuation of the Forward Fernandina project because it is in her words “not necessary”.

This problem is not isolated to the Superdome, but is happening everywhere in North America and to a slightly lesser degree in Europe. More than half of America’s gas transmission and gathering systems were built more than 50 years ago. Power grids, sewage systems, water distribution systems; the essence of everyday life quality but often already past its life cycle. Obama is talking about 70,000 bridges in the US being defunct in one way or another, yet we’re spending trillions on homeland security instead of infrastructures. His state of the union address was laced with optimism and painting rosy pictures of energy independence. Insiders know, nothing is further from the truth.  An global economic giant like New York City can be taken off the grid by a crappy storm like Sandy, because power and communication lines are still above ground and water grid structures are past their life cycle. (I say crappy because compared to Katrina, Hugo, Isabel or any of the Caribbean hurricanes, Sandy was a category 1 storm. Of course there are always people who need different justifications and excuses to make a name for themselves, which is why Washington Post reporter Brian McNoldy wrote something about Sandy’s kinetic energy being bigger than Katrina.) Stories like this will always find supporters of non action, people with warning index fingers, giving others the justification to sit back (and relax until the next catastrophy).

Let us put things in perspective: how many cars do you see on the road that are from the ’60s? How much time and effort do you think goes into maintaining a 50-year-old car to make sure it is roadworthy? Ask some of the exhibitors during the Concours d’Elégance next month, and you’ll be amazed and awed by the answers.

The reality is that pipelines, power lines, and other energy infrastructure are getting older and more ineffective (leakage) every day and becoming more prone to shutdowns, security breaches and accidents.

Yet, in Western nations, it is becoming more difficult to upgrade facilities due to regulations, bureaucracy and irrelevant protests from environmentalists. No I’m not saying environmentalists are bad news, what I’m saying is that environmentalists need to be educated on true issues versus irrelevance. Because all the uneducated objections will lead to a downward spiral that is difficult to reverse… unless industries, governments and environmental groups begin adopting the “Sensible Solution”, an idea which could balance the urgent need to update our aging systems with the need to protect the environment.

I used the 35 minute black out in the Superdome to watch this youTube video. If energy is the face of happiness, we need to pick ourselves off the floor and start building a sustainable future.