Understanding the Road to Happiness

If your happiness is defined by stuff, you'll be working for the rest of your life. 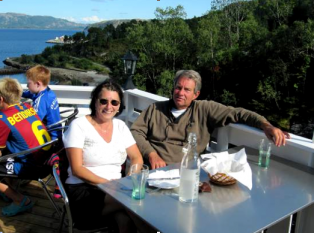 My brother and his wife on their deck overlookng Trondheim Fjord

Happiness is a very personal emotion. I realized that once again when my oldest brother sent me this Year’s Report of his fishing lodge in Vangshylla on Norway’s Trondheim Fjord. Loaded with happy pictures of a large variety of freshly caught salmon, trout, plaice, atlantic cod and their freshwater varieties, he and his wife Marlies reminisce every year over the great times they had with their guests and friends in their little Paradise.
They found their happiness in fly fishing more than 30 years ago and built their lives around it.

I’m not a fisherman, I’m a sailor. Wind in the sails, sun on my face and some rocking blues music in the background, my happiness is the blue water vastness. I compensate however by living on the water’s edge as passing of the time has turned living on a sail boat a bit uncomfortable and on occasion (storms) more of a challenge than I’m ready to endure.

And yes, we’re talking about the elusive pursuit of happiness and how it changes as life and time work their magic. According to an article several months ago in Entrepreneur magazine, researchers kind of “off the cuff” stated that 40% of happiness is genetic, 40% is derived from things we choose to do, and the remainder results from circumstances in our lives – such as our age, gender, quality of relationships and yes, our wealth.

Even though I’m skeptical when people start divvying life up into percentages, I accept the relativity of it all. 40% genetics? Maybe, but the next 40% deals with “things we choose to do” which requires available circumstance. In other words happiness depends too a large degree on where you’re born or better yet, where you live.

No surprise therefore that a 4 year survey between 2005 and 2009 in 155 countries concluded that the five happiest countries in the world – Denmark, Finland, Norway, Sweden and the Netherlands – are all clustered in the same Northern European region, and all enjoy high levels of prosperity.

They also share another factor that is often conveniently overlooked; they are relatively small countries with highly developed socio-democratic structures and populations between 5 and 17 million people (actually except for the Netherlands with 16.6 million inhabitants, the other 4 countries count less than 10 million people each. In other words, they are politically  and economically manageable. This in turn means that it becomes easier for an individual to pursue happiness in the things they choose to do, which Entrepreneur Magazine determines as the other 40%.

And than the last 20%, kind of the icing on the cake if the other 80% has already blessed you with a pretty content outlook on life, is determined by age, gender, relationships and oh yeah…wealth.

But here is the trick. Wealth can make you happy if you don’t care about it. Care too much and it becomes a tool for guaranteed unhappiness. It can surely make you unhappy if it’s the sole focus of your life. Not only have I learned that the notion of wealth operates on many different levels, it’s how you spend your wealth that will really influence how happy you are. And if you’re wealthy, here are 5 principles to consider during this Holiday Season and throughout your life for increasing your happiness through monetary means:

I could have said instead: Pursue personal growth through experiences. Last night we went to check out The Travel Agency’s “Discover the World” Travel Show at the Ritz Carlton, Amelia Island and marveled at the sustainable and educational travel destinations and programs offered. Buy the things you need, but splurge on life’s experiences.

2) Use your money to help others.

One of my charities of choice is not really a charity. It is www.Kiva.org. Kiva allows you to micro loan money from $25 to $500 to entrepreneurs all over the world. The loan is paid back over time and then I re-loan the money to another entrepreneur. With $25 loans I’ve helped people to buy rice to plant and flowers to grow, and I’ve given money for sewing machines and fabric and even cows, so people could accomplish their dream to become an entrepreneur. I have other charities, but this one gives me the greatest satisfaction. May your charity of choice do the same for you. Another favorite of mine is supporting a better life for animals. Very little can induce as much happiness as the gratitude of a rescued animal.

3) Buy many small pleasures instead of a handful of large ones.

I’m willing to bet you can make your someone special very happy for $10 or less tonight. I have heard all my life that the thought process behind a gift means a thousand times more than the gift itself. Think about that before you go all out on another Christmas Shopping Spree, the result of which is forgotten before New Year’s Day arrives.

4) Pay now but use later, obviously the reverse of Buy Now and Pay Later

In addition to helping you stay out of (Credit Card) debt, this attitude makes us happier because it builds anticipation (which is pleasurable in and of itself). We also tend to make smarter choices when we pay now and consume later.

One of the reasons I don’t buy expensive cars anymore is the sheer number of cars on a luxury lot with several more lots on that “Boulevard of Dreams”. I used to drive Alfa Romeos, Lancias, Mercedes, Audis, Jaguars, even a Ferrari 512 TR for a short frightening while. A new car every year. Those were the 70s and 80s. I always knew that after I bought yet another one there would be one that I liked even more. I learned that the solution to avoiding the comparison shopping syndrome is simple: Find a good option, go with it and don’t look back. It’s the utility that counts. A car needs to take me safely and comfortably (and these days affordably) from A to B. And if the distance from A to B and back consumes too much of my life, it won’t matter if I drive a Cadillac limousine with a driver, I will not be happy. If your life is consumed by completely life consuming, albeit well paying career positions, you may occasionally “buy” back happiness thru what society calls a “Mid-Life Crisis”.

Money and happiness are obviously connected.

There are no two ways about that. But when we spend money on collecting material goods or status items, there is ‘no natural stopping point.’ There will always be a bigger house, a fancier car, a more expensive watch or a diamond for a younger version trophy wife to go after.
When it comes to “intrinsic needs,” which includes food, rest, relationships, health, personal growth, most people can naturally reach a point of satisfaction without too much monetary consideration. But as the expression goes: “You can only eat so much caviar and drink so much champagne.

Spending more on quality of life, as opposed to stuff, surely appears to be a much better investment as I look at my brother’s pictures from his life at the little waterfront hideaway in a Norwegian fjord, he purchased some 25 years ago and slowly build it into his dream of happiness.

I’d like to close this epistle with a time-tested observation from Steve Sjuggerud (written in 2008) on how to have more daily wealth. Steve is not only a long time Amelia Island Resident, he is also one of the world’s leading investment advisors . This observation isn’t about investing or stock-picking, but rather about the small things we can value immediately that give us greater daily wealth, gratitude, happiness, or whatever you would like to call your pursuit.

How to Have More Daily Wealth

Greetings from the Oregon coast where I’m living my dream. 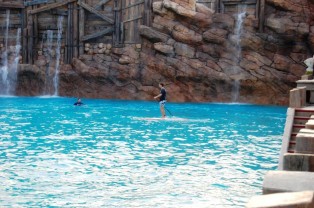 Yesterday, I windsurfed perfect head-high waves alongside 2004 World Champion Scott McKercher. The day before, I went surfing with champion paddle surfer Ekolu Kalama and his wife. No crowd, just us.
I feel fortunate to be here with these guys… and it reminds me of what’s important in life:
It’s about EXPERIENCE, not STUFF.
My wife and I try to live this idea – that “experience” is more important than “stuff.”

For example, our kids (ages seven and five) are probably the only kids they know that don’t have a PlayStation or an Xbox or a Nintendo Wii. They don’t have a ton of stuff. But they’ve got tons of life experience…
Our kids have seen the world… They’ve been as far north as Iceland. And they’ve been as far south as New Zealand. Yet we don’t have big flat-screen TVs in our living room or den. (Are we the last Americans to actually have regular TVs?)

The great thing is, life experiences don’t have to cost much at all. Waves are free. Wind is free. Spending time with your friends and family is free.

Before I came out to Oregon, we spent time with my family in Orlando. Over the weekend, the kids shot waterguns at their granddad in the pool, and my mom fixed unbeatable home-cooked breakfasts. Everyone had a great time. It was a great family experience. And it sure didn’t cost much. It’s not what it costs that makes it valuable.

It wasn’t about buying “stuff.” And this trip to the Oregon coast isn’t about “stuff” either.

I define living well as

1) having time with friends and family,
2) pursuing my passions, and
3) well, not worrying about money.

The nice thing is that you don’t need a fortune to live well by that definition.
Living well to me isn’t about monster flat-screen TVs, driving a BMW, or wearing diamond-encrusted watches. How about you?
You only have so much money… so what do you put a premium on?
It’s so easy in America to be sucked into “stuff” – from the pressure to “keep up with the Joneses” to the constant barrage of advertising from every angle.

But you can’t take stuff with you. I’ve heard investor Doug Casey say, “I’ve never seen a hearse with luggage racks.” And if stuff is what you choose, just remember, you’ll be busy working for the rest of your life to pay for your stuff.

If you follow my definition of living well, then the goal becomes living life to the fullest instead of buying stuff… and saving instead of buying so you don’t have to worry about money.
People want to invest successfully so they don’t have to worry about money. If you change your definition of living well, then you can get to the point of not worrying about money a lot faster.

Again, my idea of living well is:

1) Having time with friends and family.
2) Pursuing my passions (which I’m doing on the Oregon coast now).
3) Not having to worry about money.

What’s your idea of living well? Is it about the experience, or the stuff?

Personal Note: In closing I would like to leave you with Kekich Credo. The entire Credo encompasses 100 observations, but a short version says: “Cherish time, your most valuable resource. You can never make up the time you lose. It’s the most important value for any productive happy individual and is the only limitation to all accomplishment. To waste time is to waste your life. The most important choices you’ll ever make are how you use your time.” – Dave Kekich