Pétanque America is finalizing preparation for its 3rd American Open Tournament bringing 272 players with guests form around the globe to Fernandina. 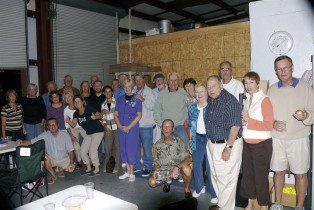 There is a Boule Buzz growing on Amelia Island. The preparations for the 3rd Pétanque America Open Tournament are starting to move into high gear with excitement written on many local faces. The old French game came to Amelia Island about two and a half years ago and a handful of local enthusiasts put the first tournament together on a shoestring and with much enthusiasm. Even already that first year 90 teams from around the globe and North America motored and flew in and Amelia Island fell in love with the game and the French Riviera atmosphere it created at the historic waterfront. This year there are 136 teams (272 players) registered, while dozens more had to be cancelled because maximum court capacity had been reached long before the 2011 summer was over.

Last night 2 dozen Tournament volunteers gathered at Pétanque America’s Warehouse to discuss the logistics and allot work schedules and tasks for the preparation, three days of tournament and the breakdown afterwards. An amazing energy poured from the group, which resulted in the amazing fact that the entire program discussion took maybe an hour, during which court construction, port-o-lets, raising of tents, manning of booths and bars, food court, entertainment, stages, registrations, award ceremonies, cleaning and more were projected, dissected, inspected and allotted to volunteers, all the while enjoying pizza, snack foods and a glass of life’s wonderful adult beverage options. Being closely involved with several other events on the island and the meeting schedules they take, I was pleasantly surprised not to even have to miss my Monday night TV show line up.

With coordination of all the activities in the now experienced hands of Pétanque America owner Philippe Boets and his trusted right hand TJ Seaton, the official part of the meeting was  over in less than 45 minutes, rounded of by a quick but delightful trivia for some Pétanque gadgets prizes, a parting beer or wine and whispered arrangements between several local teams that are playing in the tournament to hit the practice courts in anticipation.

The game of Pétanque (Jeu de Boules) as it is played today, showed its origins sometime around the turn of the 20th century (1898-1907) in the Southeast of France from where over the years it traveled pretty much all over the world, often on the wings of French Liquor Distiller Ricard from the Mediterranean port City of Marseille. Pétanque today is played by millions in more than 65 countries, most notably in Western Europe, Southeast Asia and North and Central America. Since the mid 1980s the game of Petanque has been growing in the US into a respectable number of clubs around the country . No surprise therefore that this year’s preliminary tournament statistics include players from 23 US states, besides Canada, Holland, Belgium, France, Germany and Israel; also 67% of the players are male and 33% female; the exact age range is not known yet, but maybe about the same as last year when the youngest tournament player was 14 and the oldest 83. 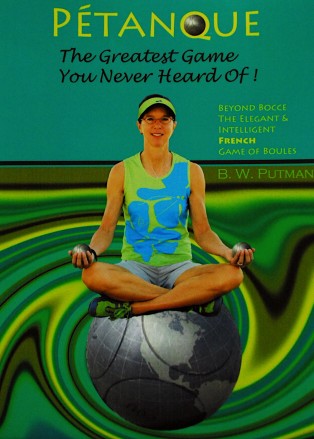 “If you’re looking for a fun distraction during a family barbeque, stick with Italian Bocce; if you want to be challenged with a subtle, complex, multi-layered, inexpensive, egalitarian, environmentally friendly and truly universal sport – then you’ve got to give Pétanque a hard look”, says Byron Putnam.

Like all great sports it can be played casually, but it’s true essence is only revealed (and fully appreciated) during intense competition. A couple of weeks ago Putman came out with the first comprehensive English language Pétanque book; Petanque, the Greatest Game You’ve Never Heard Of. Petanque America will have this brandnew soft cover book available for sale at the tournament and after thumbing through it last night, I am sure it’s going to lift Pétanque in America out of its relative obscurity, played from relax lifestyle locations like Amelia Island to Bryant Park nestled in between Manhattan high rises, to mainstream America. The game is just that much fun!

Here is an outline of the finalized tournament program so far.

Friday, November 11
– 90 Minute Morning and Afternoon Clinics for Beginners and Intermediate Players. Cost $15 and $30. Half of the collected monies go to the Boys and Girls Club.
– Official Player Registration starts at 4:30 pm. Local Businesses that would like to offer something special to the players, to be included in the registration package need to contact TJ Seaton at stmaartengirl45@yahoo.com

Sunday, November 13
Start 8:30
– Finals anticipated around 5pm
– Happy Hour and Live Music after the finals are over

9:00 Award Ceremony – Location to be announced