Last Monday's random killing of a young cruiseship tourist near Coral World in the Virgin Island of St.Thomas is just one more casualty in a decades long history of neglect in search for a sustaining economy. 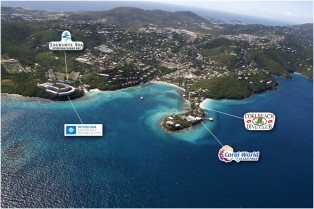 Many Caribbean Islands are experiencing the results of decades of neglecting the dynamics of mass tourism. Last Monday’s random killing of a young cruiseship tourist near Coral World in the Virgin Island of St.Thomas is just one more casualty in a decades long history of neglect in search for a sustaining economy.

Without too many exceptions, the Caribbean Islands are all blessed with incredible displays of nature, pristine beaches, turquoise crystal clear balmy waters and for the most part friendly simple people with historically little more wants than fishing and working their land for food, raising their families and enjoy each day in the tropical sun.

The first time I landed on a Caribbean Island was in 1978 in Curaçao for a corporate board meeting followed by a long weekend on St.Maarten. Especially the last island was in the early decades of developing large scale tourism. Construction was the main economy and has remained so for the last 32 years. You go to St.Maarten and you will see large scale construction going on. The island did not even have a power plant until 1964, yet by 1978 mass tourism was embraced as if it were Manna from Heaven. St. Thomas and the US Virgin Islands, a hundred miles to the west of St.Maarten faced a similar development that had started about a decade earlier.

The number of hotel-resorts and condominium projects going up was mind numbing for these small islands. Many of the local families became rich overnight as developers bought up their lands, but the problem started when their were not enough construction workers. Islanders are related all over the Caribbean and soon workers from all over the islands started arriving to pick up jobs in construction, regardless of the fact that the US Virgin Islands were United States territories, immediately neighbored by the British Virgin Islands, you can practically reach in a short swim, St.Maarten has been shared by the Dutch and the French since 1648, and all of the Caribbean islands have a deep colonial past.

The major neglect that has caused today’s crime sprees is anchored in the fact that over the centuries national laws and policies have changed the fabric of these small islands. Until the early 1980’s no island really cared about immigration policies. Islanders moved in waves to where job opportunities became available.
Many St.Maarteners worked the refineries on Aruba before tourism and construction became a viable income supporting alternative. The US Virgin Islands however had a bigger problem as the US welfare system was part of their “benefits package” which included foodstamps. In the 2 years I lived in St.Thomas (Sept 1986-Oct 1988) I witnessed the abuse of the welfare system a thousand times if not more. This system attracted a lot of of islanders with family ties to take up residence in St.Thomas. They came from everywhere, Jamaica, Haiti, Dominica, Grenada, Antigua, St.Vincent, Barbados, St. Lucia- worked in construction or hotel maintenance and created relationships and families that bore children without a “legal” nationality.
These children went without education, no paperwork to apply for jobs that would generate tax income for government to potentially provide services to integrate this whole sub culture.

Today there are thousands upon thousands of “illegals” in these islands and with the ups and downs of tourism in a politically and financially more interconnected world, many of these teenage and early twenties offsprings spend their days in tree shades talking about how to score some dope, action and money.
St.Thomas has 44 murders so far this year; no doubt the large majority of it are the result of domestic disputes. Still for a 21 square mile island with a population of about 100,000 these numbers are frightening. If Boulder Colorado or Wilmington North Carolina with a similar population would have 44 murders so far this year, the national media would be all over it. Not so in the Caribbean.

I spent 22 years of my life “in the islands” and when I moved there in the 1980s it was truly paradise, with the first signs on the horizon of trouble to come. I left St.Thomas after my good friend Genevieve was murdered one morning by an Angel Dust crazy from the Dominica, who enjoyed trading foodstamps for PCP.
I left St.Maarten a couple of years ago when the economy up north went south and crime in the neighborhoods accelerated rapidly because of “undocumented, uneducated kids without one shred of a future.

I don’t often admit that I wrote the “Manifesto” for the Democratic Party in Dutch St.Maarten in the early 1990’s and addressed the solutions with a list of requirements to address the issue of a growing undocumented underground population. Even fewer people know that I used a lot of Ronald Reagan’s beliefs, especially the Sanctity of the Individual, in the approach to governing.

In the end it didn’t do much good, because the islands will bow to the needs of the Cruise Industry and that need currently is “Keep My Guests Safe”.
So a completely random victim of growing violence as a result of policy blunders and longtime neglect, is now the catalyst for cruise operator demands on island governments for safety, no matter how.

Well the how will be a specialized police force with guns and armed to the teeth on every street corner of what once, not too long ago, was called paradise. Politicians these days think that band-aids are solutions for longterm neglect, until amputation becomes the only viable “cure”.