Valentine’s Day is a Hoax

Where those involved in a relationship must spend money they don't have to throw away on items that die or generally add inches to the waistline... all in the name of love! 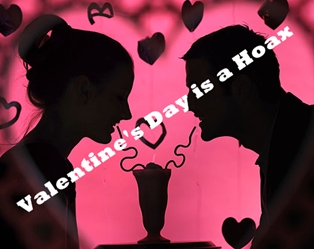 Valentine's Day is a Hoax

I have always thought that Valentine’s Day was a hoax! No more than a Hallmark Holiday designed for the American consumer to spend money on greeting cards and frivilous gifts. No, Hallmark is not alone in this conspiracy theory, chocolatiers, florists and the inventor of satin boxer shorts are all in on the scheme!

I am not Catholic, so I did some research on Saint Valentine and found there were at least three celebrated martyred Saints named Valentine or Valentinus. I always thought Valentine’s Day was named after Rudolph Valentino. He was the sex symbol in the early 1920’s known as the Latin Lover and gets no credit whatsoever for the holiday!

I grew up in public schools where boxes of Valentines were a required purchase each year and then individually addressed to everyone in my class, including my teacher. All of the pretty girls got extra cards or especially fancy Valentines from those carrying crushes. Some had candy, some did not. From the time I was six years old, I wanted to skip that day of school.

Held on February 14, this holiday celebrates love and affection among couples, and causes depression and often heavy alcohol consumption in those who are single. According to Wikipedia, the holiday was originally established by Pope Gelasius I in 496 AD, but it wasn’t associated with romantic love until the Middle Ages.

Now though, it is a day of guilt. Where those involved in a relationship must spend money they don’t have to throw away on items that die or generally add inches to the waistline… all in the name of love!

The Valentine, a written expression, has been traced back to the 1400’s, though it likely lacked hearts and cupids.

Around 1600 Shakespeare penned the following:

“To-morrow is Saint Valentine’s day,
All in the morning betime,
And I a maid at your window,
To be your Valentine.
Then up he rose, and donn’d his clothes,
And dupp’d the chamber-door;
Let in the maid, that out a maid
Never departed more.”