Vehicle Support for the Troops

Military fatalities in Iraq and Afghanistan have been greatly reduced since MRAPs have replaced the up-armored Humvees. 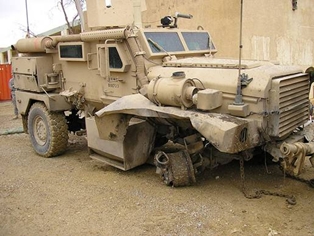 MRAPs: The Cougar is Armored Vehicle Support for our Troops

There are many ways to support our troops fighting in Iraq and Afghanistan. My husband works for a company, Oshkosh Corporation, which prepares and repairs trucks for the United States Marine Corp. These trucks are called MRAPs or Mine Resistant Ambush Protected vehicles. MRAPs come in models with names like Cougar, Buffalo, Caiman, RG-31, RD-33, and Cheetah. Oshkosh was awarded a contract to work on MRAPs after US Defense Secretary Robert Gates demanded that the vehicles be ordered in larger numbers after the Marines reported in 2004 that no troops had died in more than 300 IED attacks on Cougars. The numbers of fatalities from IED attacks have been greatly reduced since these trucks have replaced the up-armored Humvees.

An IED is an improvised explosive device. They are built by the insurgents using anything they can to make a bomb and they are often disguised and then placed along and on the sides of the roads.

The image above is of a Cougar that was hit by a mine and then driven at 20 mph by the crew back to a safe area on three tires and a rim. The crew only sustained mild concussions.

An email from a soldier stationed in Afghanistan has been circulated recently among the employees that work on the MRAPS. It helps them to know that the work they are doing really helps to support and protect our troops.

Parts of the email are quoted below:

“I can’t say enough good things about these MRAPS. Our company is in the hottest area of Afghanistan as far as IED activity is concerned, and we’ve had dozens and dozens of IED strikes on us, but we haven’t had one KIA. Lot’s of casualties, but no KIA…

Anyway, even when we take hits from the big IEDs, somehow our guys manage to walk away. I wish I could show you some of the videos of the hits these vehicles have taken. I’ve got one of a buffalo going airborn[e], as in all wheels leaving the ground, after a direct belly hit from a huge HME charge, and the worst injuries were some sprained ankles and severe concussions…

So let me say THANK YOU, to you and your team for keeping these big beasts on the road. I had to go out on a mission a couple of weeks ago in an old 5-ton dump truck with only light armor and I felt almost naked.” 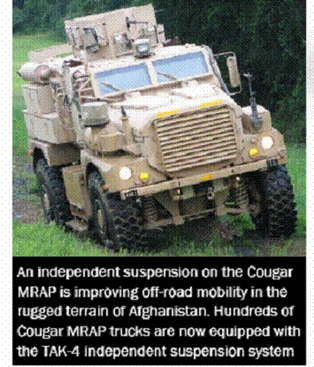 Independent Suspension is added to the Cougar

Oshkosh is installing TAK-4 ISS (independent suspension systems) upgrades on these vehicles at the MRAP sustainment facility in Kuwait. They also repair vehicles that have sustained hits by mines and IEDs.

Civilians can do a lot to support the troops and contribute to the war effort. Before he started working on MRAPs in Kuwait, my husband up-armored 5-ton dump trucks and Humvees in Iraq. Although I miss him very much while he is away, I am very proud that he helps our military while I hold down the fort here at our home on Amelia Island.