The Vickipalooza Concert started out last year to help out Vicki Hancock in her struggle against disease. This year's beneficiairy is Cathy Gentry. 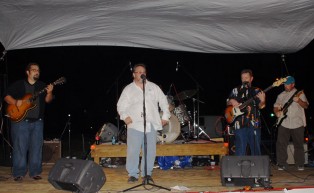 Karl Davis is one of the performing bands at Vickipalooza

Of course while we’re still trying to pull our heads out of the cloud from last weekend’s Amelia Island Blues Festival, there is another 12 hour long concert taking place in Camden County, our Georgia Neighbors to the north: the Vickipalooza Concert from 11am to 11pm tomorrow.

The following release came in this afternoon, so I post it in its entirety for the sake of speed. 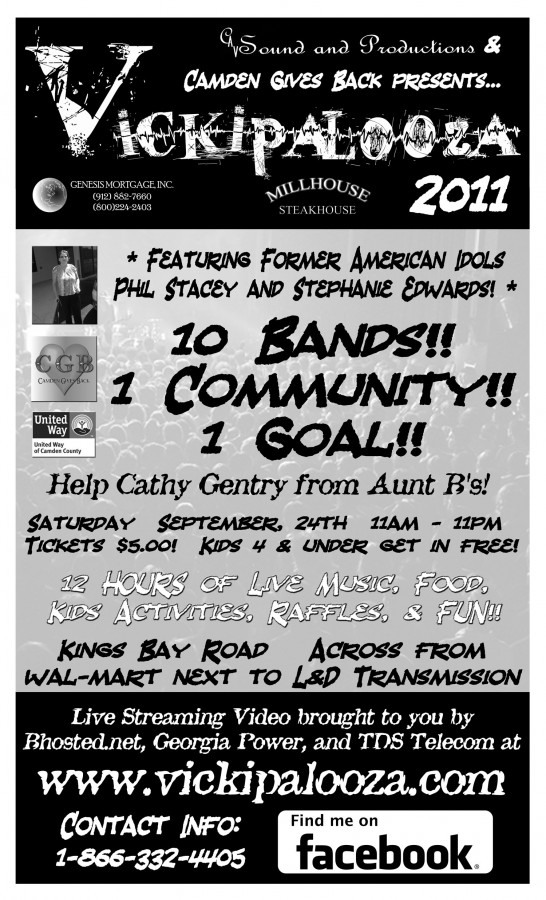 The Vickipalooza Concert event is to benefit Cathy Gentry who survived a massive stroke January of this year. This event which had its first year in July of 2010 was a great benefit to Vicki Hancock and the family to help support her Bone Marrow Transplant. As some of you might know, just like Cathy, Vicki suffered a massive stroke and the life saving Bone Marrow Transplant took a whole different turn. Vicki did receive her transplant and the focus then turn to stroke rehabilitation. After six months in a hospital 650 miles away she was released to a rehab hospital in Jacksonville. She did very well in rehab, but just four days before her release and finally getting to go home after being away for so long, she started to reject her transplant and had to be readmitted to the hospital. Vicki’s fight against cancer ended on 2/22/11.

In the 23 years that we have lived in Camden the sprit and dedication of the people of this county to helping a neighbor in need is inspiring. The Vickipalooza concert, now an annual event is a great honor in remembrance of Vicki. The family will always be grateful for this community’s support.

I don’t know Cathy Gentry personally, but seeing the effects of a stroke and how it changes a life and the lives of the family members, I truly can understand what they are going through. The report of Cathy’s progress, her fight and determination is reminiscence of Vicki’s spirit and willpower.

I was not able to attend the event last year, but will give as much help and support as possible. All are invited to support this event in any way for Cathy Gentry. Cash donations can be made out to The United Way of Camden County, c/o Camden Gives Back. Sponsorships in return for marketing, prior to and at the event, are still available to help fund the expenses of putting on an all day music festival. We could also use the help of local businesses to donate raffle items or booth spaces at the event itself. There will be no charge for vendor space at Vickipalooza this year. We just request a small donation of any profits made at the event, whatever is in your heart to give.