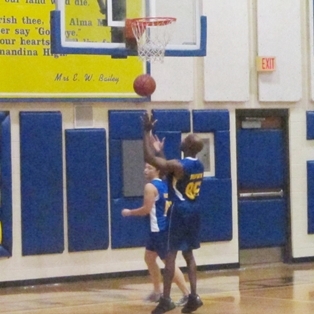 The Harlem Ambassadors came to Amelia Island to take on the Nassau Nets at Fernandina Beach High School on February 24, 2012.

The show was presented by the Rotary Club of Fernandina Beach as a fundraiser for their college scholarship and charitable programs.

The National Anthem was performed by Julia Nichole Savage who always does a fantastic job!!!

The roster for the Nassau Nets, our local team of community leaders, included several familiar names:

While the show was filled with laughter and cheers as you can see in the video below, there was a petition being passed around to help put Lade Majic in the Basketball Hall of Fame. Known as The Queen of Show Basketball, she is possibly the first woman to coach and play alongside her male counterparts in show basketball. She holds a Master’s degree in counseling and rehabilitation, and works extensively with at-risk youths through her foundation, No False Evidence Appearing Real, Inc. (NoFearInc.org).

To learn more about the Rotary Club of Fernandina Beach, visit www.FernandinaBeachRotaryClub.org. The club meets each Wednesday, from noon to 1:00 PM, at the Florida House Inn.

The Harlem Ambassadors scored more points than the Nassau Nets, but this never was about the score. Money was raised for a great cause and the Ambassadors were delightful to watch.